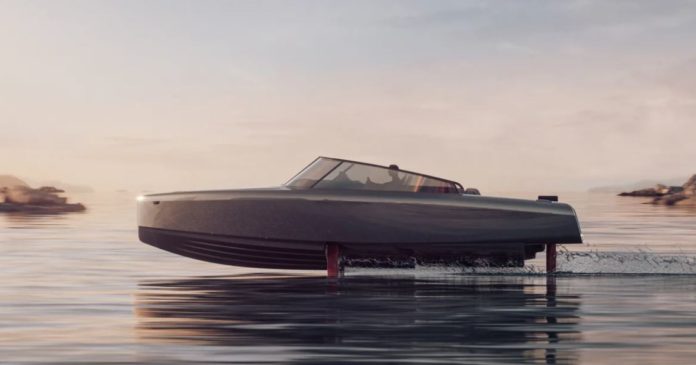 After launching the “Tesla Model S” of boats, the Swedish electric craft maker Candela aims to become the number one electric boat brand in the US. The well-known sailor, environmental activist and sustainability entrepreneur Tanguy de Lamotte will be leading Candela’s US division.

Candela’s revolutionary, ultra-efficient foiling sports boat Candela C-7 has been leading electric boat sales in Europe for the past two years due to an unmatched combination of speed, range and silence. After successfully launching the next-generation daycruiser Candela C-8 three weeks ago, the Swedish company is now focusing on disrupting the US powerboat sector, the world’s biggest market for boats.

Heading up the US operations will be Tanguy de Lamotte, who is no stranger to inspiring challenges.

Famous from the yacht racing circuit, de Lamotte has a number of titles under his belt, among them two wins in the prestigious Fastnet race. But he is perhaps best-known to the public for engaging in some of the world’s most excruciating, long-distance sail races. A Naval Architect by training, he designed and built his own boats and raced twice in the Mini Transat race across the Atlantic. In 2012, de Lamotte participated in the infamous 2012 Vendée Globe round-the-world race – known as the “Mount Everest of the seas”

During the non-stop, solo circumnavigation that took 98 days to complete, Tanguy de Lamotte slept in 1,5-hour shifts while facing storms, ice and numerous teething technical problems that earned him the nickname “Tangyver”.

A life-long activist, who used the publicity from sailing to raise money for children with heart conditions, Tanguy is a true supporter of the shift to sustainable transports. After sailing to Hawaii in 2018, he was shocked to discover that the ocean was littered with plastics – the so-called Great Pacific Garbage Patch.

This experience led him to join Google in 2019 where he, dubbed “The Plastic Warrior”, marshalled the search giant’s efforts to reduce plastic waste among the 200 000-strong workforce.

Based in San Francisco, Tanguy de Lamotte is the ideal person to build up the Swedish tech company’s US Division, focusing on promoting the revolutionary leisure boats as well as Candela’s commercial passenger craft, the P-30 and P-12.

While electric cars have already conquered the roads, electric boats have so far been slow and lacking range. The reason is that traditional speedboat hulls are hard to convert to electric propulsion, even those that plane easily. The friction from the water is so great that even the best lithium-ion batteries become drained after only a half-hour of high-speed boating.

Candela’s electric hydrofoil craft fly above the water at high speeds undeterred by waves and wind. Built in Sweden to the highest standards, they are the first all-electric boats that rival gas-guzzling competitors in range and speed.

Test rides in Candela C-7 will be available in San Francisco. Please reach out to Communications Manager Mikael Mahlberg at mikael.mahlberg@candela.com to schedule an appointment.