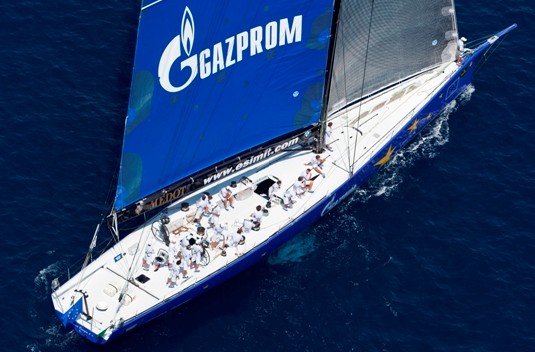 Esimit Europa 2 was first yacht across the finish line at her last challenge in this season – Rolex Middle Sea Race. With another excellent achievement the crew, already featuring 6 European nationalities onboard, recorded amazing 6 fastest times at 6 attended regattas this year.

Line honours at the Rolex Middle Sea Race, one of the most difficult regattas in Europe, demonstrated great performance by the crew, skippered by legendary German sailor Jochen Schümann, and showed the yacht’s technological superiority.

The 30-meter Esimit Europa 2, which is sailing under the European flag and is sponsored by Gazprom, covered the 606-nautical miles long race in 61 hours 24 minutes and proved once again to be one of the best sailing yachts in the world.

“We have a second amazing season behind us and we have achieved all of the goals we set out for ourselves. I owe a great debt of thanks to my skipper Jochen Schümann and the rest of exceptional crew members, who showed amazing skills in every single regatta.

I would also like to thank Mr. José Manuel Barroso, president of the European Commission, our main sponsor Gazprom, European governments and institutions, friends and endorsers, who share our vision of uniting all Europeans through one amazing sailing project”, stated Igor Simcic, owner of the Esimit Europa 2.

“In the upcoming months we will carefully analyse the season from many different perspectives, and then we will accept a decision about the next steps. In the meantime we will endeavour for broadening the project in fields of business and diplomacy”.

Skipper Jochen Schümann, twice America’s Cup winner and four times Olympic medallist, was extremely satisfied with this season’s achievements and teamwork onboard Esimit Europa 2: “The Rolex Middle Sea Race proved once again to be a difficult race with lots of unpredictable situations, tricky winds, thunderstorms and constant sail changes. We are completely exhausted, but very pleased with the result.

It is a pleasure to sail with such a professional team, completely devoted to the same goal. Despite we are coming from many different countries, there is a great synergy and friendship among us, therefore I am looking forward to the challenges in the next season”.

Igor Simcic was presented with a Line Honours Trophy by Royal Malta Yacht Club immediately after arrival, while the final prize giving will be held on Saturday, 29th October in the historic Mediterranean Conference Centre.