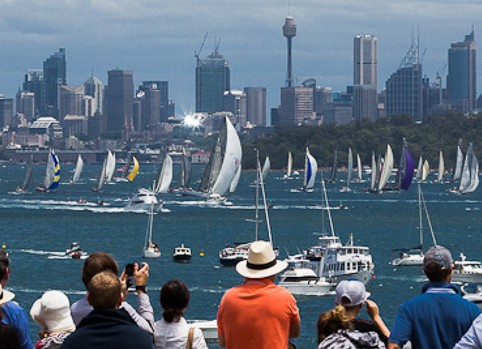 The 68th Rolex Sydney Hobart got underway in exceptional conditions. The forecast southerly breeze providing the perfect angle for a spinnaker start and run down the harbour. The angle would prove less kind as the yachts exited the Sydney Heads and made their turn towards Hobart, finding the 20 – 25 knots now firmly on the nose.

Mark Richards and Wild Oats XI looked to be in no mood to be interrupted in her bid to claim a sixth line honours, blasting off the line and showing Syd Fischer’s Ragamuffin Loyala clean pair of heels before popping out of the Heads comfortably in the lead.

An interesting night lies ahead. The decision how far to head out to sea was the first conundrum facing the crews. So far the bulk of yachts appear firm in the belief that staying inshore, and inside the rhumb line will pay better. Only, one or two boats have shown a determination to head offshore for any length of time.

Mike Broughton, navigator on Chris Bull’s Jazz, felt ahead of the start that the fleet would do well to stay inshore for the initial section of the race, certainly until the major swing in wind direction expected during the night. This transition should see the wind back to the northeast and will have the yachts running under spinnaker for an extended period.

Earlier this morning, Gordon Maguire, tactician on Stephen Ainsworth’s Loki, indicated some of their pre-race routing suggested the bigger yachts could profit enormously from the predicted northeasterly. If it arrives on cue, they could bite a huge chunk out of the course during the hours of darkness and be lying off Green Cape by mid-morning on the second day, 27 December. The small boats, meanwhile, such as race veteran Roger Hickman’s Wild Rose, might only find themselves parallel with Jervis Bay as dawn breaks. The difference in power between segments of the fleet will be all too apparent at this juncture.

At 17:30 AEDT Wild Oats XI was 8 nautical miles north east of Kiama travelling at 12 knots, with some 50 nm under her belt after 4.5 hours of sailing. Any thought of setting a new record seemed to be on hold as navigator Adrienne Cahalan called in to report the wind speed dropping as evening arrives. Ragamuffin Loyal lies within striking distance just astern. Lahana, Ichi Ban and Black Jack round out the top five on the water. Conditions have been wet and hard on crews during these first few hours and the measure of performance differential between front-runners and back markers is clearly demonstrated by Charlie’s Dream. Averaging just 3.4 knots, Peter Lewis and crew were parallel with Botany Bay having knocked a mere 13 nm off the 628nm course distance.

The start of the Rolex Sydney Hobart is like few other yacht races. The natural amphitheatre formed by the deep-water harbour offers great viewing potential from the water, at water level from the beaches and coves, and grandstand opportunities from higher ground. Every Sydney-sider has a favourite location, and South Head must be one of the most popular and dramatic. A huge crowd always assembles to watch the fleet barrel down the harbour and make the sharp out into open water. This year’s spectacle was worth the effort involved. After a dreadful Christmas Day, when rain and wind battered Sydney, Boxing Day has been a joy. Blue sky and reasonably warm temperatures brought the locals out in their thousands to cheer the determined and enthusiastic crews off on their compelling adventure.