The show is on: Esimit Europa 2 racing at the Swedish ÅF Offshore Race, Scandinavian largest regatta 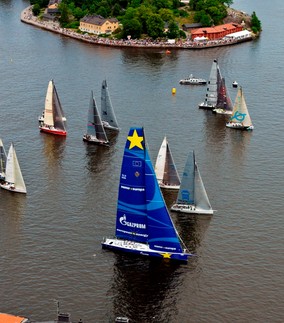 After its success at Kieler Woche the Esimit Sailing Team is just in one week time in front of another big challenge – to take on the goal of achieving line honours at largest and most renowned Scandinavian regatta, ÅF Offshore Race. Fleet of 248 boats, divided into 9 classes, embarked yesterday at 11:00 from Stockholm with moderate winds of 4 to 6 knots.

European flagged maxi racer has started in ORC A class, together with 14 yacht from 7 different countries, which are not necessarily the toughest competition for taking line honours. The rest of the classes also feature excellent yachts, including great 100-feet Swedish super maxi, multiple winners of world’s most renowned races. According to Andrew Cape, Esimit Europa 2’s navigator at the ÅF Offshore Race, light winds are expected for the entire 350 nautical mile long course, therefore more than 30 hours of sailing is ahead of the fleet. This year’s offshore racing around the island of Gotland proceeds counter-clockwise, it rounds Hoburgen from west to east, rather than the reverse as it has been in recent years.

For highly skilled Russian sailor Alexander Ekimov, the ÅF Offshore Race is his first time racing with the Esimit Sailing Team, skippered by German sailing legend Jochen Schümann: “I am happy and honoured that I was invited to join the Esimit Sailing Team. I’ve been following crew’s performances for a very long time and I know that it onboard joins world’s best sailors. In addition, as the Russian representative within this multinational crew, I am honoured to take part of the Pan-European initiative of fostering collaboration between European Union and Russian Federation. What regards the race itself, it is my first with the Esimit Sailing Team and I expect to learn a lot from the crew and yacht. Entering the true top there is in sailing is a new step for me and I will do my best to contribute to the final success.”