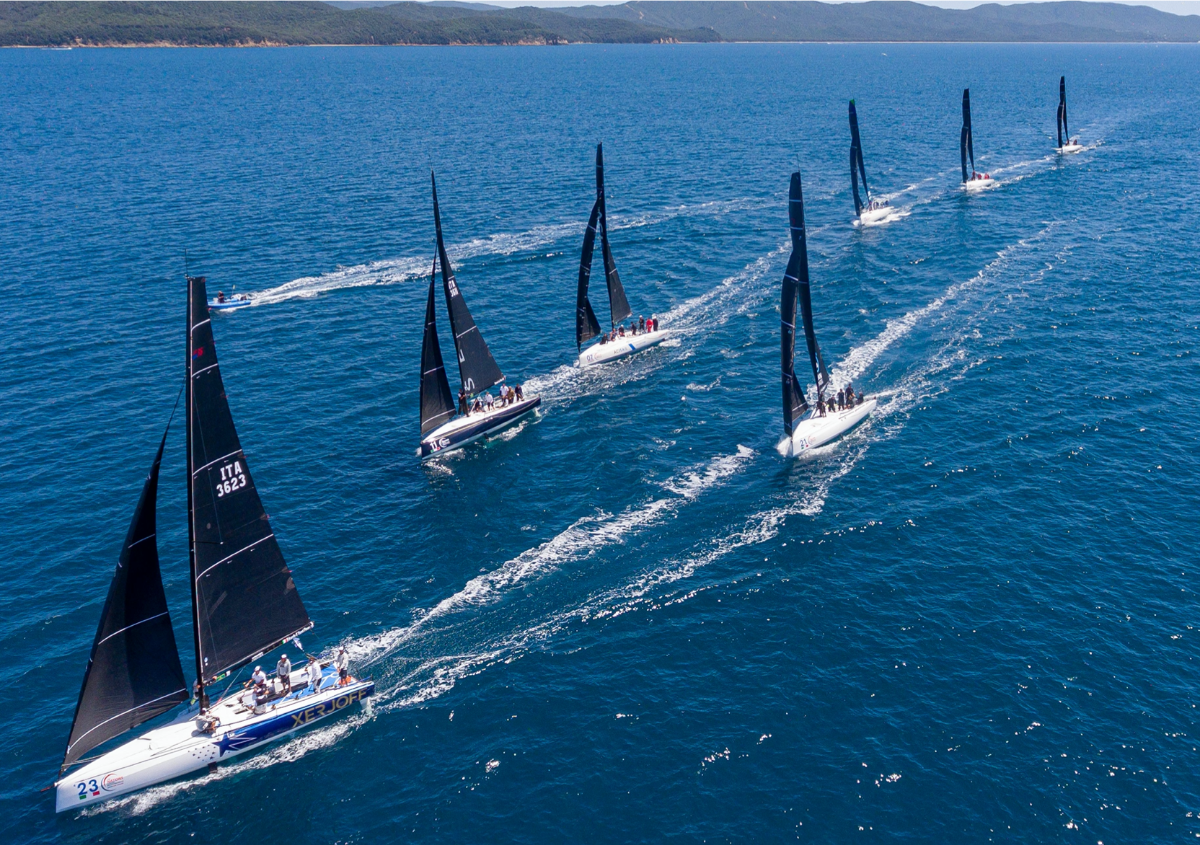 Glittering seas, cloudless skies and a stable sea breeze provided the perfect conditions for a fantastic first day of racing in the Swan Tuscany Challenge. The big fleet included 10 ClubSwan 36s and an impressive 13 ClubSwan 50s, many racing for the first time in a year.

Crews were understandably eager to get the competition started after months of inactivity due to the pandemic. So eager, in fact, that numerous ClubSwan 50s jumped the starting gun and two general recalls were needed before the fleet settled down. The smaller ClubSwan 36s were more disciplined with a clean start five minutes later.

Racing on the windward-leeward course brought out the best in these two one-design fleets. Evenly matched for speed, success is all about a good start, picking the right side of the course and consistency. To that end, Giangiacomo Serena di Lapigio’s CS36 G-Spot gave a master class. Topping the table after three races, she came in second each time.

“First of all, there is no discard in this event, so our first goal was consistency. We scored three seconds and it’s very good, especially because we had to fight really hard to keep those,” said main trimmer Karlo Hmeljak. “It was just great to be out on the water. All the racers were so pleased to sail again.”

On the bigger CS50s, it was Leonardo Ferragamo’s Cuordileone which took honours after the day’s three races. The crew scored a second place and two firsts, setting themselves up as the boat to beat in this class. “It was very, very good wind and sea conditions,” said Ferragamo afterwards. “The boats are very equal, with a great attitude in the crews. We’ve done a good job so far with training, with the same crew as for many years.”

It became clear early on that the advantage was to the north side of the course, although that didn’t stop boats from trying their luck to the south. Competition remained very finely balanced, though, with positions constantly changing. There was some impressive jousting close to the windward mark as boats screamed in on each tack to claim their water. This gave rise to a few altercations, but all were resolved without rancour by the expert jury team out on the water.

Andrea Masi’s Ulika came second in the CS50 class. The experienced crew took their chances, with two podium finishes and an anomalous seventh place. It could have been much worse, with boat lying 12th in that race on one leg. “At the back, it’s so difficult,” said owner Masi. “But the boat is so fast, and this time we have had some work done to change the cut of our sails. Today, tactics were not about where is the wind coming from, but more about where are the other boats.”

Marcus Brennecke’s Hatari matched Ulika for points, and will be a boat to watch during this event. Red-hulled Earlybird, also from Germany, performed well with just one outlying result pulling them back.

Talented newcomers
Fra Martina, new this season in the CS36 class, put on a hugely impressive display of slick manoeuvring and smart tactics to finish second in the rankings. Owners Edoardo and Vanni Pavesio and their crew have many years racing experience in sportboat classes, but helmsman Edoardo admitted that the ClubSwan felt like a step up.

“This is our first time in a small big boat,” he said, pointing to the CS36’s foiling system and super responsive handling. “This is a very good result for us. We spent four days practicing to understand the boat better.” He also praised organisers at the new ClubSwan Racing outfit. “It is a great event, starting from yesterday’s amazing opening ceremony. It takes really strong organisation to put together something like this.”

It is a sentiment echoed by many at the event, who are relishing the chance to get back to the water. And not least America’s Cup legend Vasco Vascotto, recently returned from the Luna Rossa campaign in Auckland. “It’s fantastic to be here in Scarlino with this organisation,” said Vascotto, who calls tactics on the CS50 Bronenosec. “Everybody needs to feel safe, and the organisation here is made in a way that everyone feels safe. The competition is high, and it’s great to have a lot of boats with the best names of the sailing circuit – there are plenty of Olympic champions and World Championship sailors here.”

Following a dramatic opening ceremony yesterday, featuring ribbon dancers suspended above the Marina di Scarlino, the Swan Tuscany Challenge has provided a worthy start to the 2021 ClubSwan racing circuit. Teams enjoyed an aperitivo powered by Ferrari Trento sparkling wine delivered to their boats, from where they watched the spectacle, underlining the event’s commitment to Covid safety.

“We are so excited to have gathered more than 100 of the world’s best sailors in Scarlino to mark the return of Swan one design racing in the Mediterranean,” said Federico Michetti, head of Swan sport activities for ClubSwan Racing. “We are back stronger than ever, and I believe today’s racing shows that.”