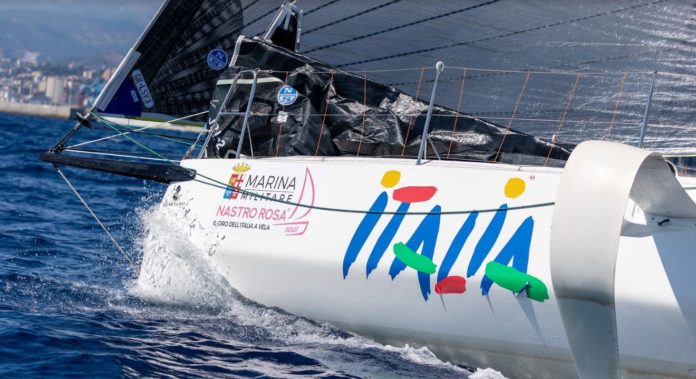 With a time of just over 43 hours, Alberto Bona and Cecilia Zorzi also won the second leg of the Double Mixed Offshore European Championship-Alilauro Trophy, a reference event of the Marina Militare Nastro Rosa Tour, organised by Difesa Servizi SpA, Marina Militare and SSI Events under the aegis of EUROSAF.

Between Civitavecchia and Naples, with forced passages in Giannutri, Palmarola, Ventotene, Ischia and Naples, the crew of Team Enit just anticipated the Marina Militare team, composed of Andrea Pendibene and Giovanni Valsecchi, and Jonas Gerckens and Sophie Faguet, finished third with their Team Belgium after having defended the second place for a long time (already obtained on the finish line of Civitavecchia).

“It was a tough stage: we encountered several lulls and, consequently, many stop and go that took a lot of effort”, commented Alberto Bona once on land. “The fleet was compacting and the difficulty lay in remaining vigilant while waiting for the new restart. Several times we have believed we could score the winning lunge, but the weather has constantly redistributed the cards allowing us to stretch first and then to be caught again. With regard to the opponents, we did our regatta on the Belgians, who finished third after Andrea Pendibene cut himself very close to Ischia last night where, using the thermal labels, he recovered several miles ”.

“The fun was not lacking and the Figaro Beneteau 3 proved to be a fast boat and suitable for this type of event”, echoed Cecilia Zorzi, already winner of the Genoa-Civitavecchia stage always with Team Enit. “Apart from Bonacce we had even long moments of breeze on 8 knots, already sufficient to make the boat move well, and a maximum point of 15 knots of synoptic from the south-east: thanks to the foils the Beneteau Figaro 3 was very fast, touching 7.5 knots of upwind “.

As anticipated, the Marina Militare Nastro Rosa Tour is now in Naples, with the Regate Village which will be operational from tomorrow morning at the Navy base located in Via Ammiraglio Acton at number 1.