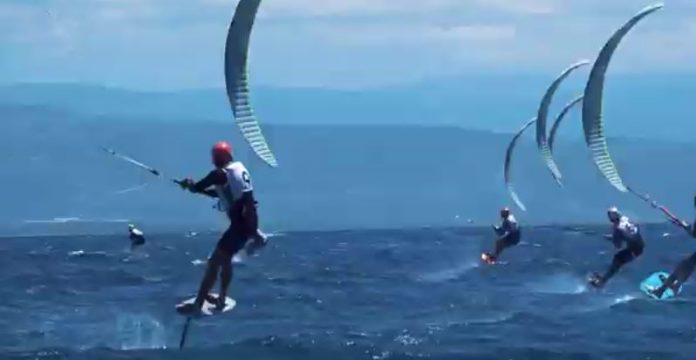 The biggest kitefoil event so far in a race calendar hobbled by Covid-19 is set to explode into action this week, on Tuesday 7th of September, when the world’s best athletes take to the water to battle for the International Kiteboarding Association (IKA) Formula Kite European Championship titles. A stellar cast of kitefoil racers, with multiple world-title holders among 90 men and 44 women, will fight it out on the track off Monptellier’s Plage Palavas-les-flots in southern France, over five days of high-octane racing. The IKA Formula Kite discipline for men and women is the format that will be used when kiteboarding makes its Olympic debut at the 2024 Paris Games’ watersports’ venue of Marseille just along the Mediterranean coast.

The innovative IKA class for 11 to 16-year-olds, divided into U15 and U17 boys and girls, will see the young racers fighting for honours on identical “one design” hydrofoils and tube kites in the Olympic pathway discipline. But undoubtedly the fastest and most keenly contested races will be among the likely five fleets—three men and two women—battling for the prized titles and hunting podium places in what promises to be breathtaking action. Racing in the Formula Kite discipline, where the athletes are restricted to production series hydrofoils and foil kites, will be divided into an opening “qualifying” series and a “finals” series, followed by the climactic final days’ “medal” races to decide the men’s and women’s titles.

Slovenia’s Toni Vodišek has shown glimmers of the form that helped him dominate the 2019 season before he crashed out with a shoulder injury. He recently won the open category at the IKA Formula Kite Pan-American Championships and took third place at the opening KFWS round in Gizzeria, Italy, in July. Vodišek was bested by Russia’s Denis Taradin in Italy after he took the podium’s top step with a peerless display over the world’s strongest men, which must mark him out as a real contender for the title in Montpellier. Still, the French are fielding a strong fleet on home waters. Axel Mazella, who took second place in Italy, and Théo de Ramecourt just behind in fourth, stand at the head of the cohort of powerful French men vying for the title.

Among the women, the US’s Daniela Moroz is likely to remain untouchable in the open category. The battle for title, however, will be fierce with Britain’s Ellie Aldridge fighting off challenges from the French contingent of Poema Newland, Lauriane Nolot and Alexia Fancelli, with the reigning champion Julia Damasiewicz (POL) in the mix. Whatever the final outcome, though, the 2021 Formula Kite Euros will inevitably serve up a thrilling week of drama on the Montpellier track to help reset the kitefoil race scene.