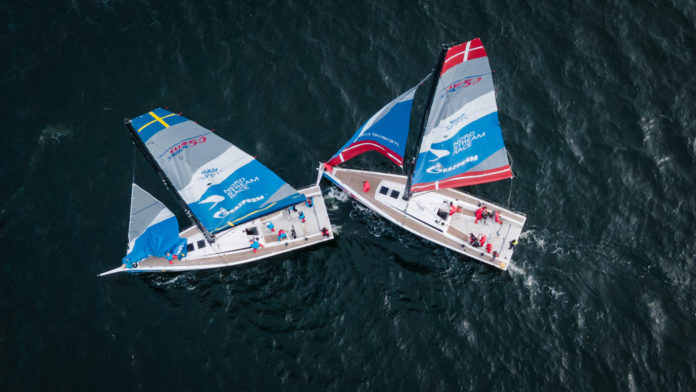 For the first time in the history of the Nord Stream Race, a collision between the Danish and Swedish boats leads to a retirement, so that this afternoon only the teams from Finland, Russia and Germany were able to start the third leg from Stockholm to Helsinki and compete in all remaining races. In the pre-start phase for the third offshore leg in Stockholm, a collision occurred during the battle for best position on the line, when the Danish boat’s bowsprit got jammed in the stern of the Swedish boat. The resulting damage could not be repaired in the short term, meaning that the Nord Stream Race 2021 ends prematurely for both teams. The Russian team won the morning’s Inshore Race in a spirited duel with the Danes and took the lead in the overall ranking of the Inshore Races.

Peter Warrer, the experienced skipper of the Danish team from Aarhus Sejlklub took full responsibility for the collision: “In the pre-start sequence we were fighting for the best position, as one does. We wanted to duck behind the stern of the Swedish boat and I calculated that it was possible. Obviously, I miscalculated the space and we crashed into the Swedish boat. It’s unfortunate and it’s never nice to have a collision. It’s especially difficult for us right now because we were leading the offshore standings and had good chances of winning overall. The team was doing awesome and it’s sad that we can’t continue the race in a proper manner.”

In top-level sailing, collisions in high performance racing yachts like the ClubSwan 50 are going to happen from time to time. The sailors are pushing the boats to their limits, and every metre counts when two top teams like the Danish and Swedish crew are fighting for position. After an initial damage assessment by Allan Cameron, Technical Director of the racing fleet with decades of experience in boat management, it is clear that the damaged boats will have to go to Tallinn for repairs: “Both boats need to undergo a comprehensive examination and of course a proper repair in the wharf. We will monitor the restoration closely and will ensure that both racing yachts will be in flawless condition for the next Nord Stream Race.” That the motto of the Nord Stream Race “Connecting Baltics Through Sport” still stands above all after this incident is shown by the great gesture of the Swedish skipper from Kungliga Svenska Segelsällskapet Christian Harding. Ever the gentleman, Harding bought pizza for the two eliminated teams and invited Peter Warrer to his home before the boats are transferred to Tallinn for repair – by mixed crews of Danes and Swedes.

For Harding, the safety of his team is paramount: “I’m happy that no one was injured – not on our boat or the Danish crew – and everyone is well. Racing is fun but the wellbeing of the crew has always the highest priority. The team is sad that we can’t continue racing in the Nord Stream Race especially after winning the previous offshore leg. We’re still good friends and will join the other teams in Helsinki for the gala dinner.” A jury in Helsinki will decide whether the Swedes will be awarded average points for their exit from the Nord Stream Race 2021 as compensation for the remaining races, inshore and offshore. This would still give the Swedes a chance of a podium finish.

Trimmer on board Team Finland, Sam Stenman is highly motivated to win the race into his home waters and now with the Danes out of the race, the chances are certainly higher: “We are sailing well, we have good boat speed and we are doing good manoeuvres during the night time despite the fact we’re quite young and new as a crew. We’re looking forward to the next leg to continue with our performance. Obviously, the leg to Helsinki has the highest priority for us in this race because it’s the one we want to win the most. We really want to repeat our win from the first leg.”

The Danes still lead the offshore standings after two legs but will slip down the rankings after their early exit. The two remaining offshore legs and the Inshore Races in Helsinki will now be a three-way battle between Team Russia, Team Finland and Team Germany.