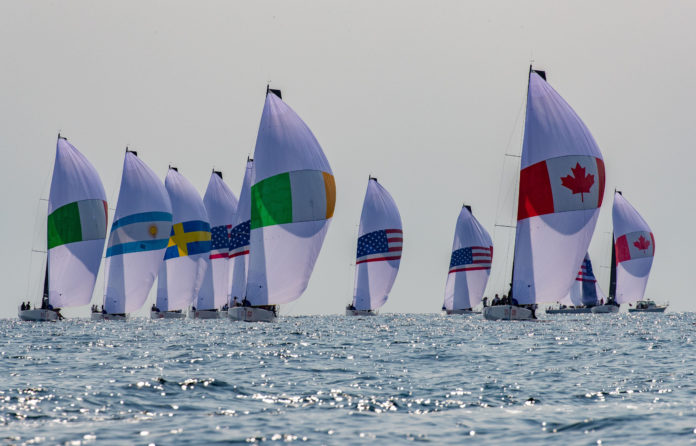 There are strong starts to a regatta and then there’s the day on the water put in by Royal Thames Yacht Club to open up the racing in the 2021 Rolex New York Yacht Club Invitational Cup. The British team, which won the event in 2015 and has sailed in all but one of the seven editions, finished second in the first race, repeated that feat in the second and then tacked on an emphatic win in the day’s final contest. The RTYC team will fly the golden spinnaker on Day 2 of the event, and carry a 7-point lead over the host New York Yacht Club, which sits second, a point ahead of 2017 champion Southern Yacht Club.

“Very pleased,” said RTYC skipper John Greenland. “You know it’s a tough regatta. To be able to finish a day and know you’ve got a great starting point…We were just thinking, normally we’re coming off the water [on Day 1] thinking, ‘How are we going to catch up with that fast boat.’ Luckily we’ve had that day, so it’s great.”

The Rolex New York Yacht Club Invitational Cup is a biennial regatta hosted by the New York Yacht Club Harbour Court in Newport, R.I. Since the event was first run in 2009, it has attracted top amateur sailors from 48 of the world’s most prestigious yacht clubs from 21 countries. After five editions in the Swan 42 class, the 2021 event will be the second sailed in the IC37, designed by Mark Mills. The strict one-design nature of this purpose-built class combined with the fact that each boat is owned and maintained by the New York Yacht Club, will ensure a level playing field not seen in any other amateur big-boat sailing competition.

The regatta will run from Saturday, September 11, through Saturday, September 18, with racing starting on Tuesday, September 14. A live broadcast on Facebook and YouTube, starting on Wednesday, September 15, will allow fellow club members, friends, family and sailing fans from around the world follow the action as it happens. Nineteen teams from nine countries will compete in 2021. The 2021 Rolex New York Yacht Club Invitational Cup is brought to you by title sponsor Rolex and regatta sponsors Helly Hansen and Hammetts Hotel.

It was forecast to be a challenging day on Rhode Island Sound, for both competitors and the race committee, thanks to a breeze that moved around like a pre-schooler confined to his seat for too long. And while the long-term progression was in one direction, there were plenty of holes in the breeze and the random oscillations that drive tacticians crazy.

Greenland chalked up RTYC’s success to the all-powerful combination of good speed and solid decisions.

“I think trying to keep the boat going, the boat powered up and getting over the waves was really important,” he said. “[Ian Dobson] was on tactics and getting us on the right side of the shifts and in pressure. I think it was just as important to be in the pressure as it was to get the shifts right today.”

Greenland also noted that having a team that has been here before—27 total times across the team, and seven times himself—was helpful on the opening day, which followed a hectic three days of mandatory practice, meetings and social activities.

“I guess I’ve got more used to the fact it’s a big event with a lot going on, and you’re not going to be overwhelmed by that aspect of the event, but still the same level of nerves going into the first race with 19 great teams all of whom can be on the start line and win this regatta,” he said. “[We] go into today knowing the beast of the event a bit better. It’s great to be here. Everyone knows the challenges that have been had by all the teams thing to attend this event and the yacht club to put it on, but it’s fantastic to be here.”

Finishing one place behind Royal Thames in each of the first two races was Royal Cork Yacht Club. Like Greenland, Royal Cork skipper Anthony O’Leary has been to all seven Invitational Cups. He and his crew, which includes two of his sons, know well the nuances of the event.

“We had some difficult starts,” said Robert O’Leary, Anthony’s son. “We managed to get out of the first two well. Really tough on in the last race. Playing the middle, in these boats, on the first beat isn’t really the tactic we go for. But we were forced into it. We were happy to come out with two thirds and, of course, the 11th in the last one will hurt a little bit. But every score counts and you’ve got to fight for every place.”

While IC37 designer Mark Mills is an Irish resident, and his designs are quite popular in Europe, the IC37 does not yet have a foothold in Ireland. Robert O’Leary said the team came to this event worried that lack of time in the boat would be a handicap.

“We were quite worried the last two years that the American boats, and any of the other teams that had a boat, would catch up a bit, getting the boats up to speed quicker,” he said. “But we were quite happy with our boatspeed today and how we’re getting around the race track. So we’re a little less worried today than we were at the start. We know it’s a tough regatta, every place counts, and we’ve just got to keep grinding away.”

Royal Cork finished the day with 17 points, good for fourth place in the overall standings. In fifth, just one point further back, is the Royal Vancouver Yacht Club, which had, by far, the best day of the four rookie teams.

“My personal secret goal is I was hoping for one top-five finish in this event,” said Cochrane, after a 7-5-6 on their first races in the IC37. “To be sitting in fifth overall after the first day…just to be able to play, to be in the same water at this level, and we can look at them and see their set up, we’re just trying to learn as much as we can. But boy, they’re good. They know the boats really well, and it’s just a pleasure to be here and to learn from them.”

Cochrane is one of four Olympians on the Royal Vancouver Yacht Club team. That kind of talent is a great way to climb a steep learning curve. He was also quick to credit the efforts of the host club to get each team up to speed.

“I just can’t thank [the New York Yacht Club] enough for organizing all the coaching and everything,” he said. “If we had come in here and not had access to that, there’s no way we would’ve been able to get around the race course the way we did today. It’s really a testament to how welcoming and open this event is.”

Whether he and his Royal Vancouver team feel the same way tomorrow, when the breeze is expected to be in the mid-teens, remains to be seen. They’d do well to consider this bit of advice from Greenland, who’s seen all sides of this event: “You start each day as if it’s the first day of the regatta.”

It worked today. There’s no reason it can’t work tomorrow.