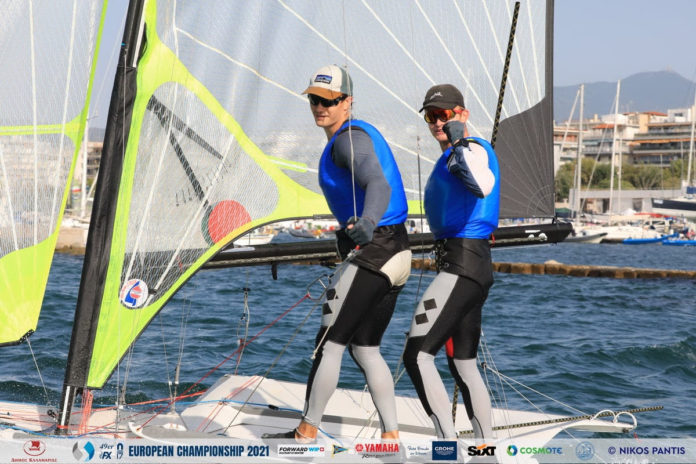 Mikolaj Staniul with Kuba Sztorch (POL) won a tit for tat battle with Tim Fischer with Fabian Graf that played out over two 49er gold races on the final day in Thessaloniki. The two leading teams were separated by only two points heading into the day. Both teams initially got ok starts, but then the Germans fouled another team and had to do a spin, setting them back in the fleet. By the top of the beat, the Poles were ahead, and then managed to finish with a boat in between the Germans, setting up a tie heading into the final race.

Again, both boats got off the line well, and were both heading back to the middle of the course on Port up the first beat when the Germans tacked off and dug left a bit farther. By the time the two came together again the Poles were again ahead, and then again matched the Germans around the race track to secure the win.

For Staniul and Sztroch they’ve now set a milestone for Poland in 49er skiff after years of being incredibly close to capturing the European Championship. Both of their Polish team mates, Lukasz with Pawel and Buksak with Wiersbicki have come very close to winning the Euros, but have come up short each time. In this win, the younger Pols score a milestone for their program, but also beat their training partners for the first time ever at a Championship. It is certainly an event to lay down their intentions toward Paris inclusion.

In second place are Fischer with Graf, who had not raced in over a whole years since they lost out on Tokyo inclusion at the last European Championship. The years of practice clearly showed as they built up through the week and had an incredible run toward the tile. Poland also secures the Bronze medal through Lukasz with Pawel, who led for the early parts of the regatta but faltered in the closing days.

While Dutch sailors celebrated the silver medal win in Tokyo of Bekkering with Duetz, the Dutch squad of FX sailors continued to work on their trade. The squad mentality they share in the Netherlands, frequently switching partnerships paid off clearly here in Thessaloniki as van Aanholt teamed up with de Ruyter only two weeks before starting the regatta. Both teams were trying to figure out what to do as their respective teammates fell injured (in non sailing related incidents). They decided to team up, and sailed a drama filled week to sit clear on top of the standings.

In their first race they lost a cap shroud and had to do an on water replacement in between races. In the fifth race van Aanholt was hoisted by the jaw by the boat behind them on a set, and needed a trip to hospital (after finishing the race) to ensure no structural damage was done. The next day was not their best, but they managed to recover after that and managed to put up six top 10 results in a row before finishing second in the medal race to win by 30 points. Dutifully watching from shore were the van Aanholt parents, who commented on how many hurdles every champion must overcome on their journey. Winning is not easy for anyone, and while the public may see the victory celebrations, it is the trials along the way that defines the sailor. Some of the biggest smiles of the week will belong to the Dutch pair, and next we’ll see if they keep going as a partnership.

The rest of the podium battle was quite tight, with seven teams seeking medals going into the medal race. With a ten point margin, the Croatian pair of Nincevic with Vitturi managed to hold onto the silver medal position with a hard fought sixth in the medal race. Nincevic with Vitturi were heartbroken after missing the Tokyo cut off narrowly at the European Qualifier in Lanzarote this recent spring. They took a small break, but then got back to sailing. While they were watching the Olympians race in the early hours in Europe, they would follow that up with hard training each day, hungry to ensure they are not left out again.

The Bronze medal was hotly contested throughout the medal race, with four teams only separated by four points and another ten points back. Denmark, Canada, Malta, and Poland were essentially tied, with only the Pols needing a boat in between to win the bronze medal between the bunch. Canada and Denmark split directions after the start with the Danish winning the pin and the Canadians taking the right after a Port Tack Option start. The Maltese and Polish came off the line on starboard and headed left leaving only the Canadians on the far right. One by one, as the top of the beat unfolded it seemed like the left boats were behind the right boats, and that proved out as the Italians and Canadians rounded one, two, followed tightly by the rest of the teams.

The downwind proved little but most teams seemed to change tactics for the second beat, sticking to the left hand side of the course. The Canadians rounded clearly and then covered the Maltese team up the beat. The Dutch took over second place, but Canada’s Lewin-LaFrance sisters, Georgia and Antonia, held off the Maltese team and took third in the medal race, and won the Bronze medal. The Maltese Schulteis sisters finish fourth overall, and third European showing great form for a crew of 20 and 18 years old respectively.

While the other medal winners of the ‘fast boat’ fleets are taking vacations and signing autographs, Gimson and Burnet (GBR) already have their sights firmly set on Paris.

They jumped straight back into the Nacra 17 fleet ‘to get some more racing,’ said Burnet, commenting that there has been so little racing in the past two years they couldn’t pass up the opportunity to gain more experience. That sounds like a team firmly focused on the next step of their journey. “It seems like each quad, the teams that get off to a good start manage to keep it up,” commented Gimson. Tita was well ahead by 2017 in the last quad, and they ended up on top too.

Gimson and Burnet had the regatta well sewn up by the time fleet racing was abandoned for the medal race. They finished 30 points clear in the lead over Ugolini and Calfi (ITA). The medal race had a bit of dramatics, as the wind was quite up and down, impacting most severely on White with Unwin (GBR) who got caught deep into the straight set corner while many others in the fleet gybeset sped off at nearly double their speed on the first downwind. That mix up of the fleet order allowed Petard with Berthomieu (FRA) to overtake the second British crew and secure a bronze medal for France.