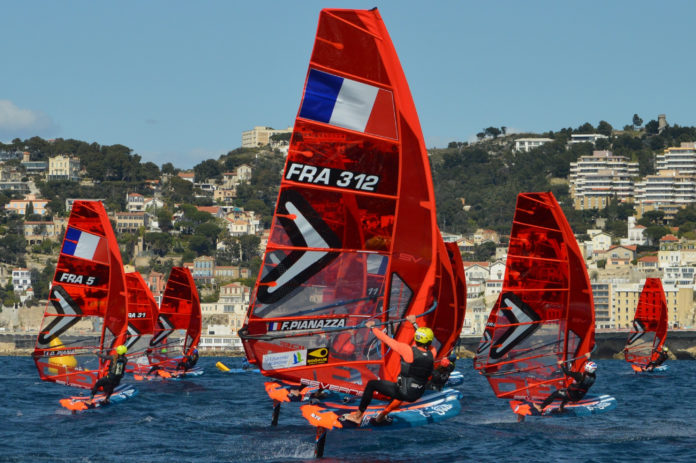 The elite of the windsurfing world has decided to get together in Marseille for the 2021 iQFOIL European Championships organized by Club de La Pelle.

More than 200 athletes are expected in the southern harbor, from October 22nd to 28th for a high-flying event!

The end of the Tokyo Olympic Games marks the beginning of the new Olympiad “Paris 2024” and “Marseille 2024” if we may say so, where the sailing events will take place.

What better way to celebrate this new era than to host an international event of the brand new Olympic windsurfing series, the iQFOIL?

Composed of technology, power and speed, the iQ is a windsurf board ” flying ” above the water thanks to a foil which allows its speed to reach over 50km/h. It will therefore officially make its appearance for the very first time at the Olympics in 3 years in Marseille for women and men.

The show is guaranteed to be the first official event taking place in the future Olympic venue for 2024.

Among the athletes expected to compete are the French female and male athletes, who already regularly monopolize the international podiums of the discipline.

We will welcome for example, Nicolas Goyard (World Champion), Helen Noesmoen (World Champion) and Louis Giard (licenced at Club La Pelle, who was 9th at the World Championship this summer). But we will undoubtedly also count on Thomas Goyard, recent Olympic medalist in RSX, who transfers on the new support for this event.

Many foreigners will also attempt to win the gold medal, such as Tom Squires, the representative of the British Sailing Team at the Tokyo Olympics and Spanish Pilar Lamadrid, who was 4th in the World Championship in 2021.

It is therefore a huge challenge for the competitors, but also for the organization that will be hosting the event and at the same time serving as a performance test that will inaugurate the new Olympic venue, the south harbor of Marseille.

The appointment has been made and the show promises to be grandiose!