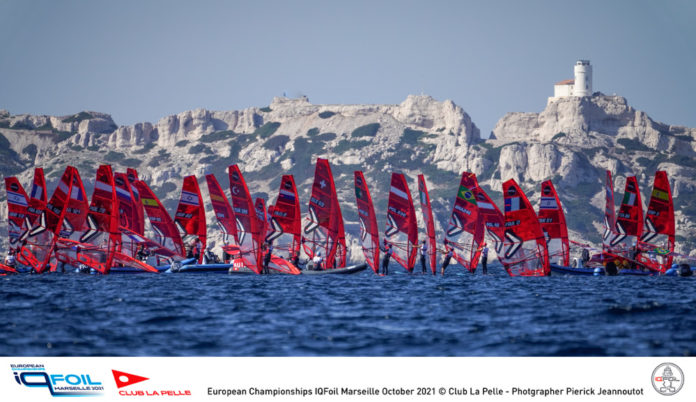 Shortly after noon, the 209 competitors finally set off on the water to reach their respective racing areas.

This time, all the conditions seemed to be met to finally get to the heart of the matter.

The sun at its zenith, the wind of 7-8 knots from the north-west sector well established and the two race committees are already in place, ready to welcome the competitors.

The wind, almost non-existent throughout the weekend, is finally there to send races on a slalom-type course. So it’s gone for a good three hours during which the starts are back and forth.

Around 3:40 pm, the wind drops and turns left gradually, the competitors are stationary waiting on the water, the referee team remains on the lookout in the hope of being able to reposition the course and restart races.

On the women’s round where the fleet is divided into 4 groups for 68 competitors, 13 starts have already been launched and 3 races are then validated. The last one could not be launched for the last two groups, it will remain on hold.

In the men’s round where the fleet is divided into 8 groups for 141 competitors, 14 starts have been launched but only one race is validated for the moment because the last two groups could not run the second race due to lack of wind.

At 4:30 pm, things started up again on the men’s circle followed by the women’s circle, the wind once again established at around 10 knots in the southwest sector and even strengthened to reach 15 knots. Committees keep running races. A total of 28 starts will be launched in the afternoon for men (4 races validated), against 27 for women (6 races validated). The goal of the day was therefore achieved with flying colors!

At around 5:45 pm, the female fleet begins to return followed by the male fleet, as the sun begins to descend on the horizon.