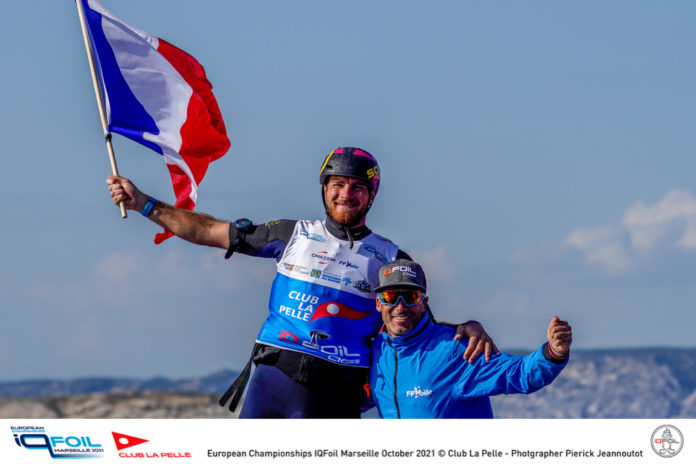 An Olympic air had been blowing throughout the week in Marseille during the IQFoil European Championship, orchestrated by the Club La Pelle. In the end, 6 days of championships with today a final day in idyllic conditions (15-20 knots in the south-eastern sector) which allowed the competition to distinguish itself.

The French, at the forefront all week, confirmed their supremacy in the finals by winning the title of European Champion for Hélène Noesmoen and European Champion for Nicolas Goyard, both already titled World Champions this summer. In the girls’ category, the Englishwoman Islay Watson and the Israeli Sharchar Reshef completed the podium. On the boys’ side, the Dutch Huig Jan Tak and Luuc Van Opzeeland both gave the French a hard time and finished in 2nd and 3rd place.

Jean-Luc Denéchau – President of the French Sailing Federation:
“First of all, I am very happy to discover this very nice organization which has been put in place by the Club de La Pelle. I am very grateful to them and it gives new possibilities, as well as new objectives to host international competitions. Because, obviously, the whole world wants to come and race in this magnificent venue in Marseille. This is a test that is a masterstroke, both in organizational terms but also for France in terms of results. We have both for women, with Hélène Noesmoen, and for men, with Nicolas Goyard, two European championship titles which come after their two world championship titles.

Thus France marks its domination in this new Olympic series and obviously, for a president of a federation, it is an extraordinary week’s record. All of this, of course, thanks to the work of the athletes and coaches. I am also very proud to have met all these volunteers who have given everything in order to offer the whole world both a magical show and make the athletes feel good. In fact, all the athletes I have met have told me how much they appreciated the welcome from France. Indeed when you come to Marseille, you benefit from Marseille, but it is France that you judge. It will therefore be important, in the fairly near future, to be able to organize new international events. Each of them with this high standard which obliges us, to obviously arrive at the event that we all expect from Paris 2024 and, in this case, Marseille for the sailing events.”

Jacques Paufique – President of Club La Pelle:
“After this European IQ Foil competition, we can draw some really positive conclusions. The best competitors in the world were present, our volunteers ensured to make this event a success from all points of view. To top it off, the European Champions are French, they confirmed at sea what they had initiated on the lake with their title of world champions in Italy last August. It is a great satisfaction for us to have successfully completed this exceptional organization and to have thus been able to highlight our city, Marseille and the future Olympic waterfront. The deadlines were very short, barely two months to take up this great challenge, but we got there!”

Yoann Agnesetta – Nautical team volunteer:
“This is my first volunteer experience for a nautical competition, it’s pretty intense! Moreover, before arriving here one does not necessarily realize the substantial work required to install the courses on the water and adapt them constantly to the variations in the wind. The days can be long, but it is a very rewarding experience. Today is my 6th day in the regatta but I also came before to help set up the whole part on land which is also a lot of work. In the sea and land team we are nearly a hundred volunteers, who work together every day to ensure that the competition runs smoothly. I discovered a close and caring team at the Club La Pelle, people that are happy to be there. For the most part, they have known each other for a long time, all from the sailing world and some come from other Marseille clubs, but also from elsewhere. I was delighted to be able to be part of this team and, naturally, I already offered to be part of future events.”

Find all the results on the event website www.iqfoilclass.org/europeans2021