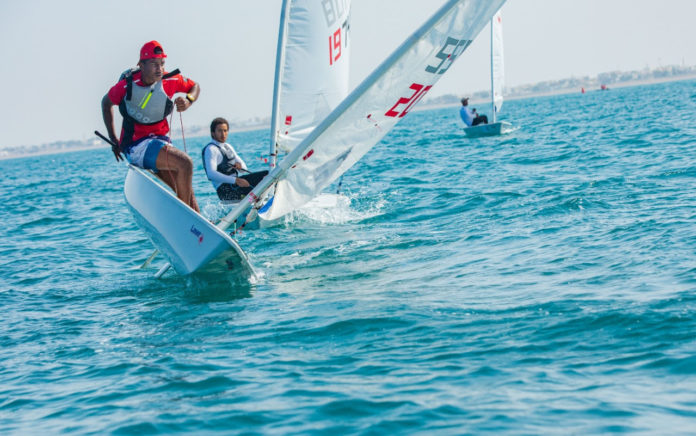 The 11th edition of Mussanah Race Week came to a close today with a three-way battle for medals in the Optimist class. After eleven rounds, Elyass Al Fhdli took the gold from fellow Omanis Abdulhatif Al Qasmi in second and Tameem Al Balushi in third.

In the ICLA 4 Class, Othman Abdulkareem from the UAE finished first, ahead of Omani sailors Mohammed Al Qasmi in second and Nebras Al Owaisi in third. Al Muta’asem Al Farsi from Oman finished strongly in the ICLA 6 Class to claim gold, overcoming Abdulmalik Al Hanai and Ali Al Sadi in a close battle for second and third.

The first para sailing competition ever to take place at Mussanah Race Week ended with the crew of Adil Al Siyabi and Ahmed Al Shukaili coming back from an early disqualification to win the gold. The crew of Ali Al Ghasaini and Ahmed Al Harrasi came second overall while Hassan Al Lawati and Zahar Al Atabi got the third position.

Oman Sail is a strong supporter of World Sailing’s ‘Back the Bid’ campaign to reinstate para sailing to the 2028 Paralympics in Los Angeles, USA. The success of the inaugural para sailing event in Mussanah shows the potential of the sport to grow and for sailing to become inclusive across Oman and the Middle East.

Shaima Al Asmi, Mussanah Race Week Project Manager, said, “This was a fantastic return for Mussanah Race Week. With 50 top young sailors from around the world coming here to compete at such a high level, we are sure that the future of sailing is going to be very bright. We hope to see everyone here again in the future.”

She added, “The introduction of para sailing and the SailFree team has been overwhelmingly successful. We are so proud of our para sailors and look forward to seeing them develop. One of the main components of Mussanah Race Week is the social and educational aspect, where sailors from different backgrounds are able to interact and learn from each other on and off the water. This is such a valuable experience for everybody and we are delighted that the event was able to return this year.”

A busy winter season of sailing continues in Al-Mussanah Sports City straight away with the the 2021 Asian 49er, 49er FX & Nacra 17 Championships. A fleet of 50 people from four countries across the continent and guests from around the world, including some of Asia’s top male and female sailors, including KC Ganapathy of India, Molly Highfield of Hong Kong, Dylan Whitcraft of Thailand and a strong team of Omani sailors, will look to gain vital experience ahead of the World Championships, also in Mussanah from 16 to 21 November, while competing for the title of Asian Champion.