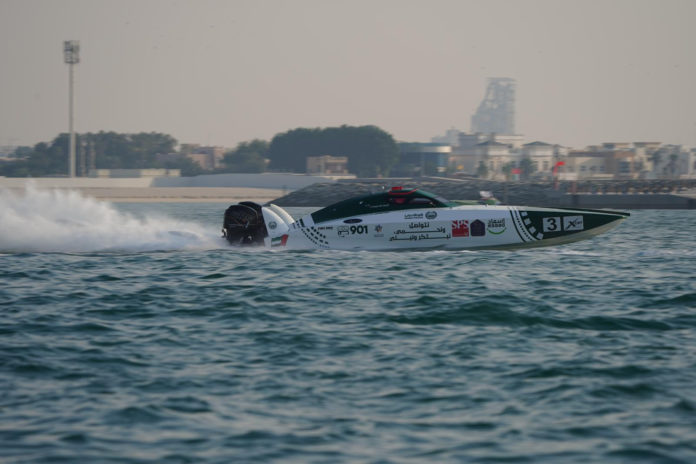 The chequered flag went down for one last time at the UIM XCAT World Championship in Dubai for the Dubai Grand Prix.

Following some very exciting back-to-back races the curtain comes down for the last time for the 2021 season.

Team Abu Dhabi 5 (boat n. 5) with Rashed Al Tayer (UAE) and Majed Al-Mansoori (UAE) took the first spot on the podium, having put the throttle to the max throughout the entire race.

Dubai Police (boat n. 3) helmed by Arif Al Zaffain (UAE) and Nadir Bin Hendi (UAE) once more made plain why they are often considered two of the most venerable drivers in powerboat racing; having been placed in last position in Pole Position yet taking the second spot on the podium.

Shaun Torrente of Team Abu Dhabi 4 commented, “It was difficult – we had a good start and fought hard, and we did our best to hold off Dubai Police. Overall, we should be in third place in the championship – which was the goal coming in, and Team Abu Dhabi 5 won today making it a great day for us”.

In a nutshell, Dubai Police are the 2021 UIM XCAT Champions, whilst Abu Dhabi 5 come second, and last but definitely not least, Abu Dhabi 4 take third in the overall championship standing.

Next up, rendezvous in 2022 because the Cats will be back!