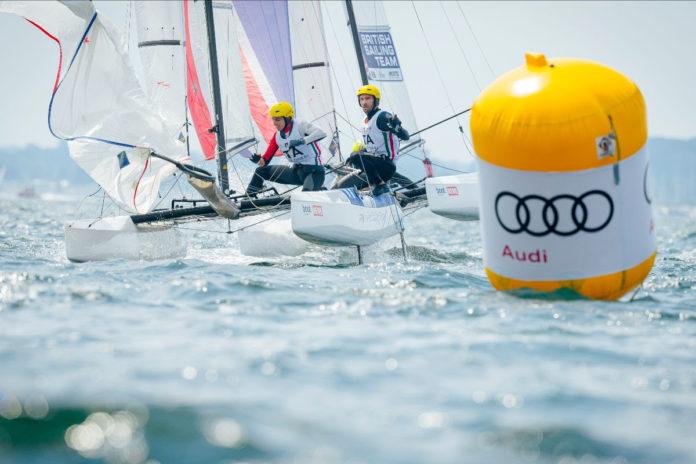 The final day of Kiel Week once again reflected the past nine days of racing. The conditions varied from calm in the morning – with a corresponding delay in the start – to dream conditions in the last possible Medal Races of the Olympic classes. A total of 326 races in 22 boat classes and disciplines plus the offshore yachts were brought to the finish on nine race courses. “It was demanding, but always fair and a wide range of events for the international sailing elite,” summarised head of organisation Dirk Ramhorst with satisfaction. The next, then 129th Kiel Week will take place from 17 to 25 June 2023 in its 141st year.

The German hosts celebrated three gold medals with Lena Erdil (Kiel) in surfing as well as Sophie Steinlein/Thomas Plößel (Hamburg) in the 49er FX and the Kiel couple Malte and Anastasiya Winkel (470). International Kiel Week triumphs on the ninth day of competition were provided by the Italian Olympic champions Ruggero Tita/Caterina Banti (Nacra 17), the British 49er duo James Peters/Fynn Sterritt, the Finn Kaarle Tapper with a convincing final spurt in the Ilca 7, the superior Australian Mara Stransky (Ilca 6) and Ethan Westera (Aruba) in iQ-Foil surfing. The 11th ACO Musto Skiff World Championship was won by Rick Peacock from Great Britain, and there were two German and one Irish victories in the three other international classes.

49er
The ten duos in the Olympic men’s skiff shivered in the light wind over a course that was difficult to read because of wind shifts and clouds in the sky. The Danes Frederik Rask/Jakob Precht Jensen experienced this painfully. They started into the Medal Race in second place, were top after the first upwind, but then made one wrong decision after another and were pushed through to tenth place in this race and seventh overall. The British team James Peters/Fynn Sterritt defended their overall lead. They won the final race and were happy about a perfect week: “We went out today to win. We wanted to sail our race and didn’t look at the others. That paid off,” said helmsman Peters. Spain’s Diego Botin/Florian Trittel managed to jump into second place ahead of New Zealand’s Isaac McHardie/William McKenzie.

49erFX
With a second place in the Medal Race, the German mixed crew Sophie Steinlein/Thomas Plößel put the gold-bringing finishing touch to an extraordinary Kiel Week. Sophie Steinlein’s regular crew fell ill, so she asked the Olympic bronze medallist if he could step in. Plößel came on board with a lot of fun and even more tips: “I came to Kiel Week to give a good coaching. I had the hope that we might make it to the Medal Race. The victory exceeded all expectations.” Helmswoman Steinlein agreed, saying she had “learned an incredible amount”: “I am positively surprised. I thought with more wind we would have more chances. Now there wasn’t so much wind, and it still worked out well.” Behind the mixed duo, Olympic women’s crews Vilma Bobeck/Rebecca Netzler (Sweden) and Georgia and Antonia Lewin-Lafrance (Canada) finished on the other podiums.

470
The Swedish World Champion of 2021, Anton Dahlberg, prevented a complete German podium success in the 470 with his wife Lovisa Karlsson crewing. Since Luise Wanser/Philipp Autenrieth faltered at the end, the Swedes still moved up to third place. Malte and Anastasiya Winkel narrowly secured Kiel Week gold ahead of the increasingly strong Simon Diesch/Anna Markfort, who made their joint regatta debut at Kiel Week. “We lost track a bit in the Medal Race in the Match Race with Malte and Nastya. The fact that we ended up in fourth place, equal on points with third, hurts a bit. But we are super happy that we could come back to Kiel Week as a 470. I was last here in 2017,” said Luise Wanser. The winning couple could breathe a sigh of relief. “Half an hour before the start came the excitement, even though I was actually a bit relaxed due to the points gap beforehand. But then we did everything we had to do,” said Anastasiya Winkel. Her husband added: “I am mega happy. I’ve never won Kiel Week, and at the Junior World Championships a few years ago I missed a medal on the last day.”

Ilca 6
There was great joy for the Australian Mara Stransky. Never in her life had she entered a Medal Race as the leader. Quite sovereign and seemingly without nervousness she completed her task and landed with another victory, the fourth in the Kiel Week series, the overall success. In the following places: Monika Mikkola (Finland) and Mirthe Akkerman (Netherlands).

Ilca 7
There was a double Finn podium at the Ilca 7. Olympic-experienced Kaarle Tapper was able to move up to first place by winning the final race. His compatriot Valtteri Uusitalo finished third. In the Finn sandwich on second place: the Belgian Wannes van Laer.

iQ-Foil male
You can hardly demonstrate your superiority more impressively than the German Sebastian Kördel. And yet in the end it was not enough to win. The surfer, who lives in Tarifa, Spain, won all nine preliminary races of the iQ-Foils. But all that doesn’t count for the surfers. The points from the preliminary round are cancelled and only the final race decides. “I had seaweed on my fin and that was it.” So Ethan Westera (Aruba) surfed past and grabbed the gold ahead of Kördel and Fabian Wolf (Kiel).

iQ-Foil female
In the Nordic-influenced female surfer field, Lena Erdil managed to defend her title on her home turf. She even managed to put away an early start disqualification in the seven races and relegated Laerke Buhl Hansen (Denmark) and Aleksandra Blinnikka (Finland) to the other podium places. Since the final series had to be cancelled here, the results of the preliminary round decided.

Nacra 17
There was a small present at sea for birthday boy Paul Kohlhoff. On his 27th birthday, the Kiel sports soldier got another chance to improve his tenth overall rank with his crew Alica Stuhlemmer. The Medal Race was started exactly on the minute with the last starting possibility, and Olympic bronze medallists Kohlhoff/Stuhlemmer came out well after a restrained start, led the field in the meantime and finally finished third. This meant that they climbed to eighth place in the overall standings. There was no doubt about the superior overall victory of the Olympic Champions Ruggero Tita/Caterina Banti (Italy) ahead of the double World Champions John Gimson/Anna Burnet (Great Britain) and the second Italian team Vittorio Bissaro/Maelle Frascari.

11th ACO Musto Skiff World Championship
Finally, it worked out for Rick Peacock: He won his first medal at the ACO Musto Skiff World Championships and then the golden one. Without another race on Sunday, he was allowed to celebrate: “At the last World Championships I lost the medal on the last day. Now, of course, it feels great. It was a strong competition, and we have a great podium,” said the Brit, who lives in the Netherlands where he trains the Olympic squad in the 49er.
“I had this week off and was able to sail the Worlds. Now it’s straight to Aarhus for the 49er European Championships. There, of course, I hope for a similar success.” Behind Peacock followed the South African Andy Tarboton in front of the Brit Peter Greenhalgh. Tarboton was relaxed about the fact that he had no chance to attack again: “That’s sailing. We had a fantastic week with a great organization, super weather, and in terms of wind there was everything – from light to medium and strong winds. I’m happy for Rick.” He also celebrated a small internal victory, as the South African, who has lived in Great Britain for ten years, forms a training group with Peter Greenhalgh and was able to relegate his partner to third place.