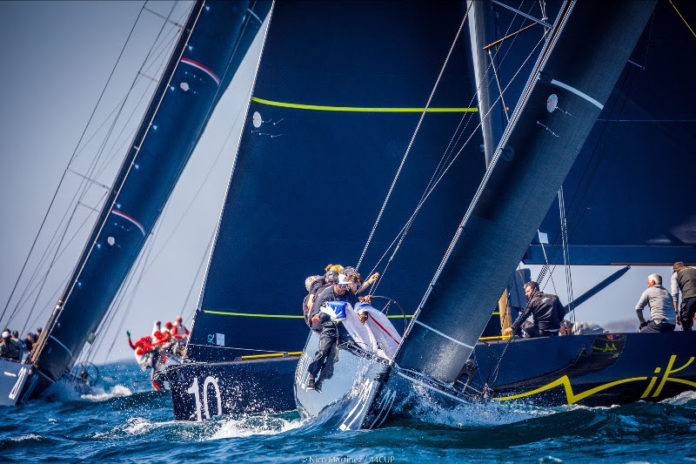 The waters off the Swedish holiday hotspot of Marstrand took on a different complexion on day two of 44Cup racing, with a sharp chop and the wind backed from the northwest to the south and gusting into the mid-high teens. But once again the sun was out and the temperature perfect for three more races to be held at this mid-way event of the 2022 44Cup hosted by the Marstrands Segelsällskap with the support of the Marstrands Havshotell.

Of the previous nine times the RC44 fleet has come to Marstrand, Chris Bake’s Team Aqua has won five times. However Bake acknowledges that they have made it hard for themselves this time with a tough opening day that left them wallowing in sixth. Today’s second race came good for the 2021 44Cup champions and reigning RC44 World Champions largely from hitting the left most vigorously, getting ahead and then hanging on. This was no mean feat as on the first bear away their starboard runner broke. Fortunately, with ultra-quick thinking, the crew found a solution: “We were able to substitute the spinnaker halyard for the upwind leg,” recounted Bake. “That is only the second time that happened to us in 15 years…”

Otherwise Bake loves Marstrand. “It is everything it is cracked up to be. I always enjoy sailing here. The scenery is beautiful and when the sun is out it is glorious and when the sun is not out there tends to be breeze. The set-up here is great.” Following their bullet with a second has raised Team Aqua to fifth but, in a usual ultra-close 44Cup state of affairs, just four points separate her from second placed Team Nika with Charisma and Ceeref powered by Hrastnik 1860 in between, all of whom had solid days.

Also suffering from a difficult opening day, but scoring a bullet in today’s first race, was Aleph Racing with Frenchman Hugues Lepic making a welcome return to the 44Cup for the first time in several events. “It is good to be back on the RC44. It is always tough, but always enjoyable”, said Lepic. Like riding a bicycle? “Not as easy, but it does come back relatively quickly because we haven’t changed crew.”

While Aqua won in the left, so Aleph Racing won by going hard right. “We had a good start which meant we could sail in clean air,” continued Lepic. “When you are ahead in the RC44 everything comes together.”

His Italian ace tactician Michele Ivaldi added: “We had a good feeling on what to do on the first race and we achieved what we wanted – start at the boat, tack, go straight and we managed to hold the lane all the way to the corner.” There, Ivaldi said, they found some relief from the 0.8-1 knot current (flowing against the boats upwind). Otherwise their regatta hasn’t been going well, trying too hard with three OCSes in six races and in another a port-starboard with Ceeref, which resulted in their picking up a penalty. “We’ve ticked off all the boxes of the things we could do wrong. Fortunately we have six more races.” observed Ivaldi.

Generally once again it was a high scoring day with Team Aqua and a polished Artemis Racing being the lowest scoring boats picking up 10 points apiece today. Torbjörn Törnqvist’s team became the first to pick up a second bullet in today’s third race, finishing inside the Marstrand fjord. Having won the first beat by going left, the Swedish team then extended and much to Törnqvist’s delight was able to lead the 44Cup fleet home. This has given Artemis Racing a four point lead at this half way stage of the 44Cup Marstrand.

At this event children from the Marstrands Segelsällskap’s sailing school have been heavily integrated with the 44Cup teams, with five youth sailors working for them for the duration of the event: helping during set-up, on board coach boats during racing, riding on the back of the RC44s and participating in daily team debriefs. This provides the young sailors with a full picture of how pro sailing teams function. The 44Cup has also donated 5,000€ to the club’s youth program. There are also numerous ‘inspirational figures’ on the boats including double Olympic champions Iain Percy and Giles Scott.

Scott, who is calling tactics on John Bassadone’s Peninsula Racing, admits he is a Marstrand virgin. At a time when many others participated previously here with the 44Cup or on the World Match Racing Tour, the towering Brit was busy acquiring Olympic medals. In the meantime he still has some way to go with Peninsula Racing. “We were going much better today than yesterday, when we were full of mistakes – we couldn’t get across the finish line without getting a protest”, admitted Scott. “We finished last in a couple of races where we had a bit of a coming together. Today was better, but we are still off where want to be, we’re struggling with pace, etc.”