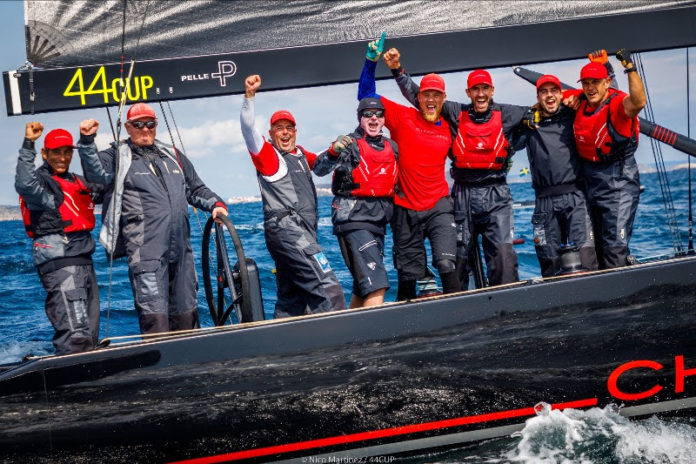 A miserable day weather-wise off the west coast of Sweden turned magnificent, like the fortunes of Nico Poons’ Charisma, which after three races today claimed the 44Cup Marstrand over Igor Lah’s Ceeref powered by Hrastnik 1860 and Chris Bake’s Team Aqua. This was the Dutchman’s second consecutive 44Cup win following his massive 12 point Cascais victory in May.

“I am absolutely happy that we won this and the last one too – we are in a good stream”, said a beaming Poons, soaked after his traditional victor’s dunking. “It is not about winning. It is about keeping the damage from the bad ones under control.”

Ceeref powered by Hrastnik 1860 started the day leading by a point. At this stage six teams could still win. However in today’s first two races, with the southerly gusting to 20 knots in the squalls and the sky for the first time grey and overcast, bringing occasional rain, it was Charisma and Team Aqua that were strongly on the ascent.

In the first race Team Aqua did well to windward of the starboard tackers and later, approaching the top mark, bounced Artemis Racing off to the right and then, on port, crossed clear ahead to lead onto the run, never looking back. Chris Bake and his team followed this with a second in today’s penultimate race.

“We joined the dots a lot better today than we did yesterday”, said Bake. “It was really shifty, but a much flatter sea state. Once you got the boat going, it was really great sailing.”

Meanwhile Charisma had finished the first race third astern of Hugues Lepic’s Aleph Racing and went on to win the second. Mainsheet trimmer Chris Hosking described it: “We got off the line nicely at the pin and went left, the way Pepsi [tactician Hamish Pepper] wanted to go. We got to the top mark in good shape and sailed away.” Out on the left they had found more pressure and a good shift.

Going into the final race and with up to eight points available, Charisma led by four points from Ceeref powered by Hrastnik 1860. By now the wind had dropped and the skies cleared. But as soon as the gun went all appeared to have gone wrong for the leaders. Up the first beat Charisma was last as Igor Lah’s team was second – an overall winning position for them. At the top mark they had dropped to third as Torbjörn Törnqvist on Artemis Racing led around ahead of John Bassadone’s Peninsula Racing.

By the leeward gate Ceeref powered by Hrastnik 1860 led again, and went left as Peninsula Racing split right with Charisma still seventh and Team Aqua last. On the next beat Lah’s team got caught among the starboard tackers, Artemis Racing again taking the lead only for a penalty at the top mark dropped them to third. This handed the race win to Peninsula Racing ahead of Team Nika. However importantly behind them Ceeref powered by Hrastnik 1860 had pulled up to third and Charisma to fourth – handing Nico Poons and his crew victory.

Chris Hosking said of the last race: “We didn’t get off the start line well and got out of phase and made life tough for ourselves. But it is not the first time we have been last. Fortunately Aqua was back there too so we managed to press the reset button and claw our way back through the fleet. We are pretty proud of the position we are in and how hard everyone is working. We are especially pleased because in this fleet there is an exceptionally talented group of people on some great boats.”

Nico Poons admitted that in the last race he was head down but wasn’t surprised his crew had been able to dig themselves out: “We have seen that before and have come back quite strongly most times, even when we have been over early and fought back. That is not bad in a fleet like this.”

Team Aqua’s tactician Cameron Appleton said they had been in a similar position in the last race: “Everyone was fighting hard and we found ourselves on the back foot at the wrong moment…”

After a regatta of mixed results, Peninsula Racing’s John Bassadone was delighted to have finally scored a bullet. With double Olympic Finn gold medallist turned America’s Cup tactician Giles Scott calling tactics on board, his Gibraltar team is undergoing a metamorphosis. “It has been a long time coming. We haven’t been sailing badly. The boat has been fast, but we have made a lot of unforced errors and silly mistakes… I don’t think the overall result represents where we should be. It is very frustrating but it is good for the guys to get a win at the end of the regatta.”

Hosted by the Marstrands Segelsällskap with the support of the Marstrands Havshotell, the 44Cup Marstrand was the third event of the 2022 44Cup which will continue over 12-16 October with the major fixture of the season – the RC44 World Championship, taking place in Portorož, Slovenia.