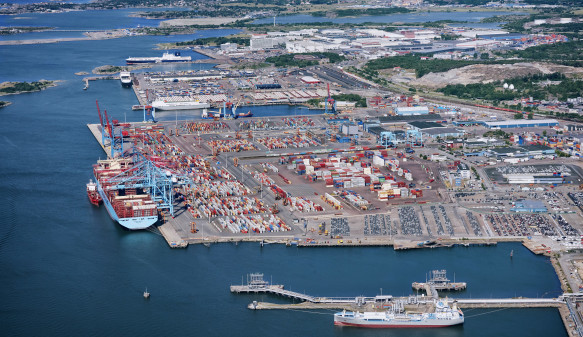 For the 20th year in succession, the Gothenburg Region has been ranked the best logistics location in Sweden by the Swedish trade journal Intelligent Logistik. The Port of Gothenburg is described as being crucial to this ranking, due in part to its ongoing investment programme, its global service network, and its handling of the Covid-19 pandemic. Still, the port has challenges going forward.

“We are extremely pleased to receive this award. The fact that it is the 20th year in succession is recognition of the continuity of the work we are doing and what we have achieved along the way. But we intend to be even better,” said Elvir Dzanic, Gothenburg Port Authority chief executive.

In the citation, the Gothenburg Region is described as “an exceptional distribution location that has remained strong throughout the pandemic”. The port’s EUR 600 million investment package, which is considered to be an excellent platform for future growth, is also cited as a key factor. Elvir Dzanic states that the port has consolidated its potential for further development moving forward.

“As a port the past year has been good – not least financially – whilst other freight hubs have been hit harder, both in Sweden and abroad. The Port of Gothenburg is in a strong position to meet the future, where we can continue to invest in and promote customer value and competitiveness,” said Elvir Dzanic.

Expansive port development
Around 30% of Swedish imports and exports currently pass through the Port of Gothenburg, along with more than half of all container freight. The port is currently going through an expansive phase in its development and during the past year funding has been secured for the vital multi-billion Skandia Gateway project involving the deepening of the fairway from 14.5 metres to 17.5 metres.

This is crucially important if we are to assure the future of the port as well as access by Swedish industry to global markets using the very largest vessels operating across the oceans of the world. Skandia Gateway is one of many investments that are paving the way for the continued growth and development of the port. Other key projects include the new terminal at Arendal, which will add 120,000 square metres of new terminal space, a completely new digital platform, and ongoing investment in shoreside power and electrification.

The aim is to continue generating growth but with the least possible environmental impact. By 2030, carbon emissions at the freight hub will have fallen by as much as 70% – on land, at the port, and at sea. The latest undertaking in this exciting journey is the recently presented Tranzero Initiative in which Volvo Group, Scania, Stena Line and the Gothenburg Port Authority have joined forces to speed up the transition to fossil-free transport to and from the port.

“Space is vital, and this is naturally something we are working on. Next in line are half a million square metres of logistics land, just a stone’s throw from the port, where we will begin building logistics facilities during the coming year. We need to continue working intensively on this, and we are doing so in collaboration with other logistics players in the region, including the Logistics Hub Scandinavia joint venture with Swedavia Landvetter Airport and Business Region Gothenburg,” said Elvir Dzanic.

The high-profile list of the best logistics locations in Sweden has been published since 2001. The ranking is founded on access to a logistics base, flows and geography, infrastructure, land access, know-how and skills, and the collaborative climate throughout the region.

The Helsingborg Region and Örebro Region were ranked second and third.

Extract from the citation:
“The Gothenburg Region is an exceptional distribution location with access to the largest container terminal in the Nordic region. The Port of Gothenburg has stood strong throughout the pandemic, with stable container volumes and six billion kronor due to be invested at the port, offering an excellent springboard for future growth. The region is in itself a strong consumer market and an important centre for Swedish export companies. Through Chalmers University of Technology and the University of Gothenburg this is one of the country’s strongest logistics research and education centres. Gothenburg has experienced an outstanding rate of growth in logistics space in recent years, and despite a slight dip in 2020 it has still managed to retain its position as the best logistics location in Sweden.”