Unusual cruise season starting at the Port of Gothenburg 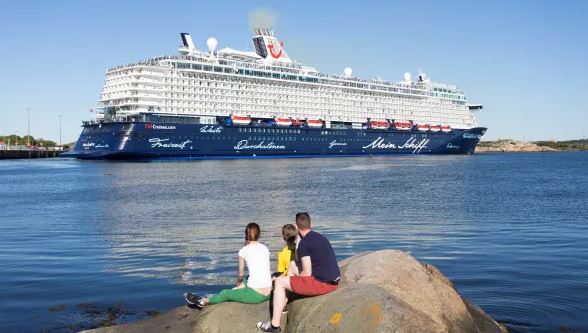 Now cruise operations in the Port of Gothenburg are restarting again after an unusually long break due to Covid-19. Compared to the pre-Covid era, the entire cruise industry has changed dramatically, revealing a stark contrast in terms of approach and ambitions.

“The industry is faced with new conditions that in reality make Gothenburg an even more attractive destination than previously,” said Martin Meriwall, Cruise Operations Manager at the Gothenburg Port Authority.

The first cruise ship to arrive in Gothenburg this year was Mein Shiff 6, which arrived in on Saturday 12 June. A welcome start to the cruise season but quite different compared to previous years.

The ship visited Gothenburg as part of what is known as a “scenic cruise”. Having sailed from Hamburg with 1,000 German passengers on board – around half the normal capacity – it entered the estuary and had a look around without anyone actually going ashore.

“Cruise guests had the opportunity to take in the beauty and splendour of the archipelago before turning at the Älvsborg Fortress without actually entering the port, making it an unusual call to say the least. It’s a pity those on board didn’t have the opportunity to experience the city at close quarters but soon we will hopefully see ships berthing,” said Martin Meriwall.

Next step – bubble cruising
Mein Shiff 6 is owned by the German cruise line TUI Cruises and “scenic cruises” marked the first step in the company’s restart plan. Step 2 will involve the vessels berthing at the port and the passengers being allowed to go ashore, but subject to the provision that they remain within the ship’s bubble, required to go on one of the cruise line’s organised tours. In Step 3 there will be a return to normal routes and capacity.

“All cruise lines have similar restart plans with an ongoing review of when and how they can move to the next step, which will be governed largely by the infection rate at the various destinations. There will also be rigorous health protocols and extensive testing capacity and quarantine possibilities on board,” said Martin Meriwall.

New normal
“Even in a future without Covid-19 the cruise industry, as with most other sectors, will be faced with a new normal. It is anticipated that cruise passengers will to some extent seek out experiences not traditionally associated with cruise tourism – a trend that could benefit Gothenburg as a cruise destination,” said Martin Meriwall.

“We have already seen signs of this shift in emphasis, which is gaining in popularity in the wake of the pandemic. Many travellers want to avoid crowds and the well-worn tourist paths. Instead they will be looking for novel experiences in more genuine environments, preferably close to nature. From that perspective, Gothenburg is ideal, with its unique archipelago and unspoilt natural experiences close to the city. And the city itself offers a balance between urban vibrancy and small-scale ambiance that people are drawn to.”

Ketchup effect
As the German market has opened up, the Port of Gothenburg is now experiencing increased booking pressure from the shipping companies.

“It is something of a ketchup effect and as the situation is now, just over 60 ships are planned for calls at the Port of Gothenburg for the rest of the year. But given the situation, it is something that can change at short notice,” said Martin Meriwall.