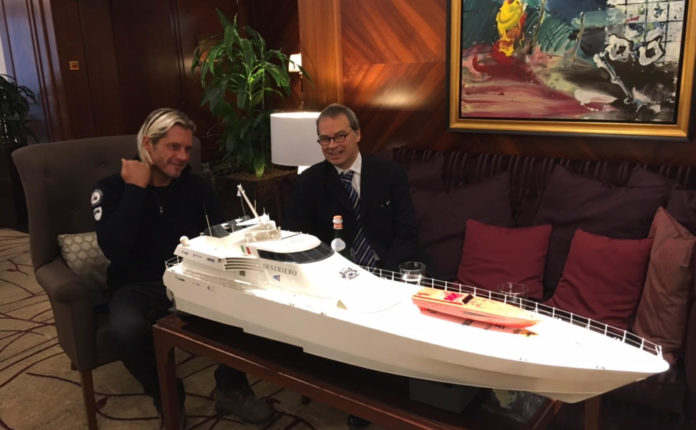 On Aug. 09, 1992 the world’s one and only racing yacht Destriero (aluminium hull, 3 turbines of US Fighter F/A-18 Hornet derivate with each 20.000HP=60.000HP, 750.000 liter fuel tank, jetstream propulsion) of Aga Khan and Giovanni Agnelli, FIAT, win after 58 hours, 34 minutes and 50 seconds the up to day valid worldrecord between USA and Europe, but not the originally envisaged legendary Blue Riband of the Atlantic for the originally fastest immigrant passenger vessel from Europe to the USA.

After failing the Blue Riband because wrong certification as a private yacht and not as a commercial passenger ship, Destriero was hidden like Sleeping Beauty for decades in U.K and nowadays at Lürssen Shipyard, Bremen, heavy DNA protected behind a barbed wire fence.

As I know and have seen physically Destriero from birth in 1992 and speedboat consortium member Roger Klueh, Speedboat USA-Cuba Worldrecord, together we are wondering since many years what will happen to Sleeping Beauty Destriero:

In Dec. 2021 Alberto Scuro, President of Automotoclub Storico Italiano, sent a letter to Aga Khan to request the ship in operational condition as an Italian Technical Monument/Heritage. We, the consortium of international speedboat specialists, highly appreciate Alberto Scuro‘s initiative and added due to the fact that the also element to success turbines are from German MTU to make an ItalianGerman 30. Birthday event out of it. If Albert Scuro would get Destriero from Aga Khan and additionally in the requested operationable condition we suggested to win with a mixed ItalianGerman crew under one Italian Captain and German Captain Roger Klueh in a 2nd run now finally the legendary Blue Riband between New York and Europe and to hand over the Trophae to Aga Khan for his great Naval Life Work. As Roger Klueh knows already the first part from USA towards Atlantic heading East from his successful USA-Cuba razorblade hellride Speedboat Worldrecord with huge waves and one of the two propulsions broken.

I’m the author: I was born in Wanne-Eickel, studied economics, over 30 years aviation within Lufthansa Group in management positions, WDL Aviation director level, Blue Wings AG member of the Board, entrepreneur of own Intermodal Air/Sea/Ground Logistic company BlueStar Cargo and complementary journalist, e.g. at SHOTS Media lifestyle and luxury magazine and contributor to n-tv Deluxe magazine and speedboats and luxury yachts passionista.