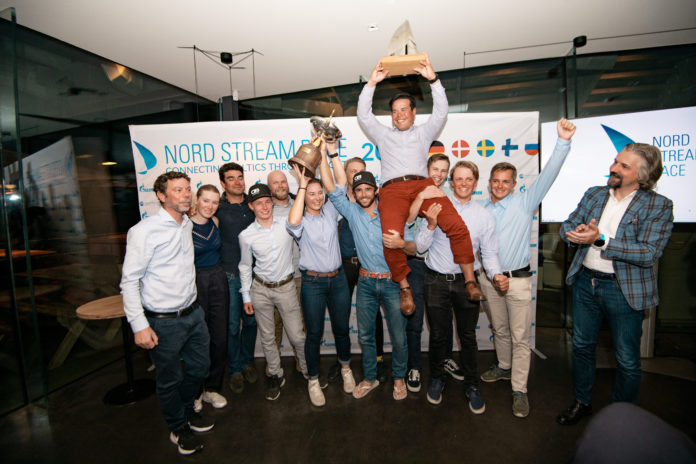 The longest offshore race in the Baltic Sea came to a successful end on Friday afternoon with the finish in Russia. Five teams from Germany, Denmark, Sweden, Finland and Russia started on 6th September in Kiel. Their mission: to connect their five Baltic states through sailing. In the end, the Finns of Esbo Segelförening won and for the first time bear the title “Best Yacht Club in the Baltic Sea”. Over the past two weeks on the route from Kiel via Copenhagen, Stockholm and Helsinki to Russia, every team was a winner.

The route from Helsinki to Russia once again demanded everything from the sailors. For the 130 nautical mile final leg of the Nord Stream Race, the three teams took more than 20 hours to reach their destination. With strong winds on reaching courses and waves of over two metres, the finale proved to be the greatest sporting challenge of the ninth edition of the Nord Stream Race and delivered a climactic conclusion to a sailing competition that brought many highs and lows.

The overall results produced two winners: In the offshore competition from Kiel to Russia, the Finns from Esbo Segelförening won ahead of the Russians from St. Petersburg Yacht Club and the Swedes from Kungliga Svenska Segelsällskapet. Oskari Alho, navigator from Esbo Segelförening, commented: “Winning the Nord Stream Race is amazing. It’s a tough race, only the best can win. It’s a team effort. In our young team everyone knew something that they could teach others. That’s why we were successful.”

The overall ranking of the inshore competition – a series of short, spectator-friendly races close to shore – was won by the Russian team ahead of the Danes from Aarhus Sejlklub and the Finns in third.

The Finnish and Russian teams had many close and exciting battles for position during the Nord Stream Race. The Danes from Aarhus Sejlklub and the Swedes from Kungliga Svenska Segelsällskapet were forced to retire after a collision in Stockholm. Only the Germans, the Finns and the Russians crossed the finish line in Russia.

Nevertheless, there were many winners in the Nord Stream Race 2021. Apart from the first places for the Finns and the Russians in the overall classification, there was a first place for the Swedes on the second leg to Stockholm, and victory for the Danes in their “home” Inshore Races in Copenhagen. This year’s race was characterised by fair play and respect for each other. “Connecting Baltics Through Sport” is the motto of the longest offshore race in the Baltic Sea, and it’s a motto that perfectly sums up this year’s event.

Peter Warrer, skipper of the Danish team said: “I encountered incredible sportsmanship and friendliness from our fellow competitors which I’m so happy about. I don’t have words for that. My biggest connecting moment was when we were in deep trouble. When the other teams supported us and cheered us up – that’s true sportsmanship in the best way of ‘Connecting Baltics Through Sport’”.

The Finns stood out with their young team that had very little offshore experience. Eight of the 11 team members are under 30 years old, the helmsman Lukas Kalermo is only 20 years old and with Sofia Toroi and Cecilia Sandman there were always two women on board. The Finns won the first and last legs. It took a lot of courage for the young sailing talent to sail day and night across the Baltic Sea for a fortnight.

The collision of the Danish and Swedish teams off Stockholm and thus their premature elimination was a great disappointment for both teams. However it never led to tension or acrimony, only to a stronger friendship between the two skippers. At the closing ceremony in Helsinki, both teams came especially to celebrate the all-encompassing fellowship that brought all these teams together during the two weeks of competition. The organising St. Petersburg Yacht Club, together with general partner Gazprom and partner Nord Stream AG, had invited the teams to honour their achievements.

The steepest learning curve was recorded by the German team from am Wannsee, which started with many sailors who were going through their first ever experience of long-distance racing on the Baltic Sea. During the final leg, the team from Berlin even took the lead for a while and certainlyvclosed the gap between the other more experienced teams.

Next year, the Nord Stream Race celebrates its 10th anniversary and will mark the occasion with a number of innovations.