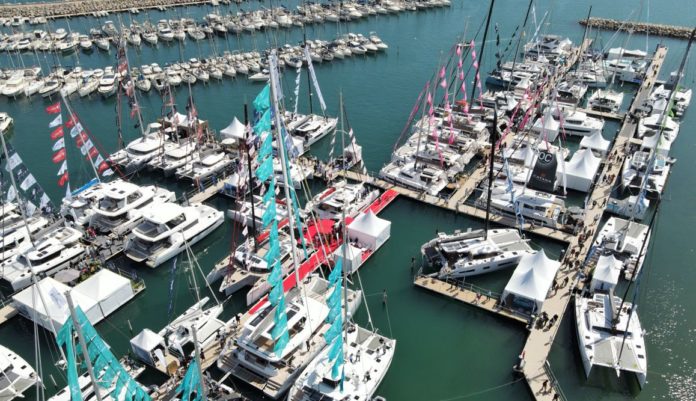 The concept of sailing on more than one hull has been taken up by the world of boating and continues to advance It is true that the advantages offered by catamarans and trimarans in terms of space, comfort, stability, speed, draught, etc largely outweigh the drawbacks The amount of space required in the harbour is the most important disadvantage, but ports are adapting to this and multis, as we call them, can look forward to a much better welcome today This type of sailing matches the requirements of a new style of boating for both experienced sailors and beginners Created in 2010, the Show which was renamed the International Multihull Show to underline its international development, has over the years become the ‘ mustattend ’ event for this sector of the marine industry. Boatbuilders have been keen to attend, as the show focuses uniquely on multihulls. Almost all the major boats from around the world measuring between 30 and 70 feet have been on show here. The number of world or European premieres has also enhanced the reputation of the Show.

This unique event dedicated entirely to multihulls has accompanied the inexorable success of the sector which has seen doubledigit growth. 35 boats were on show at the first edition in Lorient and this year, 2022, there were more than 65 on display in the harbour in La Grande Motte. Power versions have made inroads into the market and the Show has adapted in order to welcome them with everincreasing numbers on display. It is going to be necessary too to make room for models using clean energy, which is something that the trade is working on with many new projects appearing.

Comfortably installed in the Occitanie region in the harbour in La Grande Motte, the Show has found its home just a stone’s throw from Montpellier Airport. The involvement of local hoteliers and businesses has contributed to the success of the event. The future looks promising with unstoppable growth, so let us seek our inspiration in a quotation from the French writer, SaintExupéry , who wrote “He who gives up trying to be better, already ceases to be good,” so that we may meet the requirements of the market and together take the Show to an even higher level.