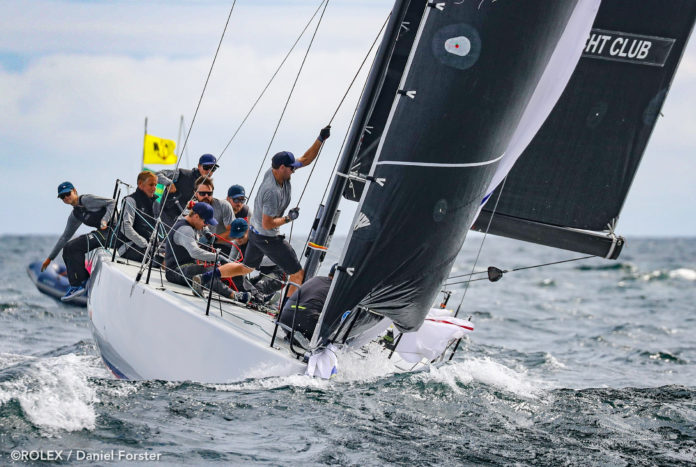 If it wasn’t the lumpy seas, it was the capricious breeze. Wherever sailors competing in the 2021 Rolex New York Yacht Club Invitational Cup turned today, there was something standing between them and the groove so essential for a solid finish in a competitive fleet: a wave, a shift, a patch of no wind, a trench of disturbed air, a picket fence of competitors on starboard tack. It was one of the most challenging days on the water in the history of this storied event.

But intense pressure creates diamonds and with its back to the proverbial wall, San Diego Yacht Club turned in a gem of a performance, winning both races and saving its hopes of a podium finish after a middling start, by its lofty standards, to the regatta. The runner up from 2019 now sits fourth.

“We had couple of tough ones the last couple of days, and we knew we needed to go out and bounce back and find it,” said San Diego Yacht Club tactician Jake LaDow. “We were able to execute two pin-end starts, which really set us up to have very simple races, minimizing tacks and staying away from other boats.”

Southern Yacht Club also sparkled today, transforming a near disaster in Race 8 into a fourth and extending its overall lead to 13 points. With four races remaining, this regatta is Southern’s to lose. They have shown exceptional speed and, save for one decision today, superb tactics. The race for the podium remains wide open, with at least five teams in contention. And, while teams in the bottom half of the fleet can no longer dream of a top-three finish, there remains plenty of pride on the line in the minor placings. For example, just 8 points separates 15th from 11th.

“Definitely” said LaDow when asked if the SDYC team reclaimed a bit of its mojo today. “We had a really good synergy between Tyler [Sinks, skipper] and Drew [Freides, main trimmer] keeping the boat at a constant level of heel in the super challenging, puffy conditions, and that gave us a lot of confidence.”

The Rolex New York Yacht Club Invitational Cup is a biennial regatta hosted by the New York Yacht Club Harbour Court in Newport, R.I. Since the event was first run in 2009, it has attracted top amateur sailors from 48 of the world’s most prestigious yacht clubs from 21 countries. After five editions in the Swan 42 class, the 2021 event will be the second sailed in the IC37, designed by Mark Mills. The strict one-design nature of this purpose-built class combined with the fact that each boat is owned and maintained by the New York Yacht Club, will ensure a level playing field not seen in any other amateur big-boat sailing competition. The regatta will run from Saturday, September 11, through Saturday, September 18, with racing starting on Tuesday, September 14. A live broadcast on Facebook and YouTube, starting on Wednesday, September 15, will allow fellow club members, friends, family and sailing fans from around the world follow the action as it happens. Nineteen teams from nine countries will compete in 2021. The 2021 Rolex New York Yacht Club Invitational Cup is brought to you by title sponsor Rolex and regatta sponsors Helly Hansen and Hammetts Hotel.

Southern’s comeback was noteworthy in large part due to the impact a bad result would’ve had on the regatta. Had SYC finished where it rounded the first mark—in the teens—the race for the 2021 Rolex NYYC Invitational Cup would be wide open. But that race rescue wasn’t the only Lazarus impression of the day. Royal Canadian Yacht Club was dead last, and by a margin, shortly after the start of Race 7, the day’s first contest.

“We had a pretty shocker start, and ended up doing a 720 after the start,” he said. “It’s really hard to come back. The good thing is when you’re that far back it’s pretty easy to sail a clear lane, and you can focus on boatspeed and sailing the numbers, which is what we did. We were able to sail our own race the entire race, including the downwinds. We made big big gains on the downwind legs by sailing by ourselves, and I think we had a pretty good mode going as well.”

After an hour of tough sailing the team crossed the finish line in fifth.

“It was a bit shocking even for us,” Fraser said. “Terry [McLaughlin, RCYC skipper] did a great job, the whole team did a really good job just sticking with it, sailing fast, keeping to our mode, sailing to the numbers. When you’re doing that, good things happen, and we were lucky enough to get back to fifth.”

The Royal Canadian Yacht Club has been a regular attendee at the Rolex New York Yacht Club Invitational Cup, missing just one of seven, and finishing first twice and second once. Fraser is part of the Club’s second generation of Invitational Cup sailors, participating for the second time.

“The boats are amazing,” he said. “It’s frustratingly close racing. Every inch matters, every tack matters, every shift matters. If you end up on the wrong side of a few things, you get deep and it’s really hard to get back. We’ve had an OK regatta so far, we need to keep pushing, basically no more mistakes at this point.”

Royal Canadian Yacht Club currently sits seventh, 13 points out of the top five. But the team is trending in the right direction, with four straight results of fifth or better.

For San Diego Yacht Club, it’s a similar situation, there’s no margin for error if they have any hope of equaling its finish in 2019. However, this is no time to throw out a carefully crafted playbook that has proven effective in the past.

“Noting changes,” said LaDow. “We still have to trust the process, trust in ourselves and trust each person in their role to do the best we can. That said we’re going to be looking for a similar day to today.”