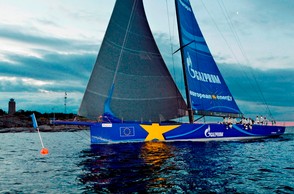 “Mission Baltic” accomplished with distinction: Esimit Europa 2, the overall winner and monohull course record holder at Germany’s Kieler Woche and winner of the largest Scandinavian regatta, ÅF Offshore Race – Fostering collaboration among Europeans as one of the main goals of the Esimit Europa project recognized by Sten Nordin, mayor of Stockholm

After more than 40 hours of sailing at the 350 nautical mile long ÅF Offshore Race in Sweden, Esimit Sailing Team crossed the finish line first on 2nd July at 3:33 am and therefore secured their 22nd line honours. The largest Scandinavian regatta, this year attended by 248 boats, proved to be one of the most scenic, yet dangerous races due to shallow waters of Stockholm archipelago.

Skipper Jochen Schümann, who led the Esimit Sailing Team to its second success after breaking the monohull course record at the Welcome Race at Kieler Woche only one week before, was pleased with the performance of the yacht and its team at the ÅF Offshore Race. “It was an exciting race for me, one of the most enjoyable I ever attended. We have started with very light winds in Stockhlom, but kept the good pace throughout the archipelago. Unfortunately, despite adequate depth of water, as many other boats, we hit an underwater rock, which was not marked in the navigation maps.

Despite the accident, which caused a sudden stop of yacht’s movement, we haven’t noticed any major damage and were able to continue racing towards the Gotland island. Immediately after rounding it, the wind died down and we entered several dead calms. Fortunately, we picked up some good breeze for the last 120 nautical miles, pushed the yacht to its limits and secured line honours. I would like to congratulate our crew members for their performance, they have proved once again their true skills and professionalism and I am very much looking forward to the upcoming races in the United Kingdom.”

Fleet of 248 boats, divided into 9 classes, embarked on 30th June at 11:00 am from Stockholm. European flagged maxi racer has started in the ORC A class with the rest of the fleet, including a 100-foot Swedish super maxi, TP52s and other yachts, multiple winners of most renowned races. Before the start, Igor SimÄiÄ, founder of the Esimit Europa project, met with mayor of Stockholm, Sten Nordin. In their discussion in occasion of opening of the race and mayor’s visit of the Esimit Europa 2 yacht, Sten Nordin expressed his intention of visiting Italian city of Trieste for the Barcolana race.

On this occasion Simiv presented also the initiative to organize a meeting of mayors of European cities. “It was my honour meeting Mr. Nordin and all the people in Sweden who came to visit our yacht. We are leaving Sweden with great joy in our hearts and I am satisfied with what we have shown there. We haven’t done any single mistake during the race, therefore I would like to congratulate my skipper Jochen Schümann and the rest of the crew for the great performance. All the races in the Baltic Sea were very much different from those in the Mediterranean, but we have prepared ourselves in the best possible way and I am looking forward to the next challenges in the UK,” stated Igor Simic.

After its performance in Sweden, the 30-meter canting keel beauty will be shipped to the United Kingdom for the start of one of the oldest continuing sporting events in the United Kingdom, the Cowes Week at the beginning of August. 18-member crew will show their skills at 3 inshore races and prepare for one of the toughest and most renown races in whole Europe, the famous Rolex Fastnet Race. With 608 nautical miles in front of the legendary Jochen Schümann and his all-star crew, the Rolex Fastnet Race represents season’s highlight, but also a big test for the yacht itself due to always unpredictable weather conditions. After the Rolex Fastnet Race, Esimit Europa 2 will return to the Mediterranean for 4 races in October. Starting with Bernetti Lombardini Cup and Barcolana in the Gulf of Trieste. On its way to Malta’s Rolex Middle Sea Race Esimit Europa 2 will try to break the course record between the cities of Trieste and Valletta (Medot Sailing Trophy).