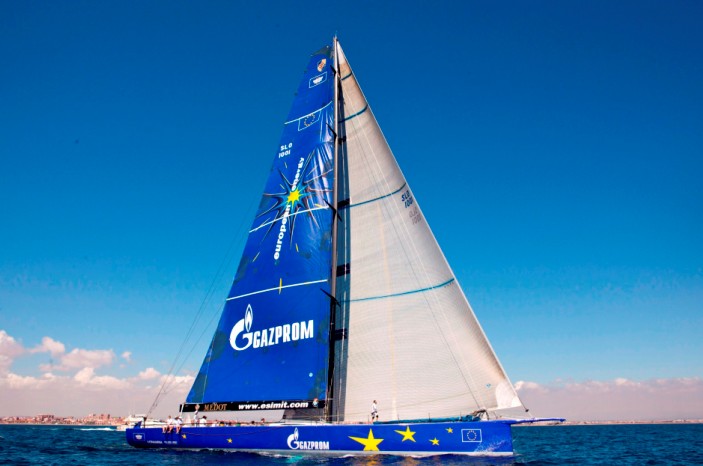 Esimit Europa, one of the most prominent European projects, presented its future goals and endeavours in sport and international diplomacy. The symbol of the project, Esimit Europa 2, one of the technologically most improved yachts in the world, which is under the patronage of the President of the European Commission, José Manuel Barosso, and has Gazprom as its main sponsor, enjoys the reputation of being undefeated.

This year it will try to conquer all five regattas – Giraglia Rolex Cup, Palermo – Monte Carlo, Maxi Yacht Rolex Cup, Bernetti Lombardini Cup and Barcolana. It will also try to beat a 9 year-old world speed record from Monaco and Porto Cervo (Sardinia, Italy) approved by the International Sailing Federation, under the World Sailing Speed Record Council Rule 21 (c) in a Powered Sailing System category. At the end of May Esimit Europa, as a symbol of strengthening European identity and mutual collaboration among European nations, companies and institutions, will be present at the meeting of the biggest European companies – European Business Congress.

The yacht has also been granted an important protocolary role in the Cyprus Presidency to the European Union in the second half of 2012. The founder of the Esimit Europa project, Igor SimÄiÄ, in collaboration with the Italian government representative in Trieste, is also announcing a gala European event, which will be organized on the eve of one of the largest regattas in the world – the Barcolana regatta. European ministers, ambassadors and other important diplomats will be invited on this occasion.

»Regarding the fact that we are heading for the last season, when we are competing mainly in the Mediterranean, our goal is to show impeccable performances at all the attended regattas and once again prove, that Europeans have our own sports symbol and our own winning team, which we can be exceptionally proud of. In the 2013 season, we will carry the European flag to some of the most demanding regattas in Germany, United Kingdom and Sweden, and in the second half of the season return back to the Mediterranean. It will be the time, when important decisions regarding our long term future will be made«, said Igor SimÄiÄ.

The 100-foot maxi yacht Esimit Europa 2 has seen many technical improvements from when it sailed into its winter base at end of the last season, especially in terms of electronics and hydraulics; it has become a true research and developmental laboratory for the biggest suppliers of nautical equipment in the world. The premium technology will this year be in the hands of 18-member international crew of sailing superstars, Jochen Schümann (GER), Juan Vila (SPA), Alberto Bolzan (ITA), Vasilij Å½bogar (SLO). They are joined by many of the experienced sailors from the whole European continent, as Albert Jacobsoone (FRA), one of the best young sailors in the world Boris Hermann (GER), Ignacio Braquehais (SPA), Anton Sergeev (RUS) and also bringing rich experience to the team is Frank O’Leary (IRL).

»First trainings in Valencia have shown that the team of our engineers, in cooperation with numerous external partners, did exceptional work, as Esimit Europa 2 is in great shape and ready for the season to start. Despite the fact that operating with such a complex yacht is a process, which takes a life-long training, I am extremely happy, that the new members acquired the specifics of sailing on Esimit Europa 2 so quickly. There is an exceptional atmosphere among us, therefore, I am with excitement looking forward to the challenges ahead of us«, added skipper Jochen Schümann.

The Esimit Europa 2 yacht sails under the flag of the European Union, is registered on Cyprus, a member of Yacht Club de Monaco, competes for the Slovenian Sailing Federation and on board joins sailors from 7 various European countries. It is under the patronage of the President of the European Commission, José Manuel Barroso, and its main sponsor is the Russian energetics company Gazprom.