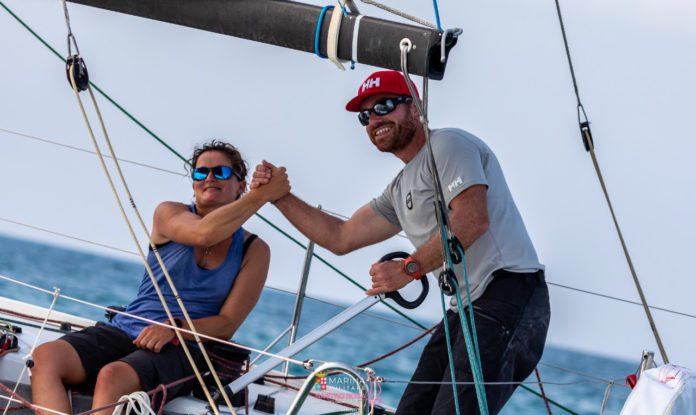 Guillermo Altadill and Alina Bauzà are the winners of the first leg of the Hempel Double Mixed Offshore World Championship, the main event of the Marina Militare Nastro Rosa Tour, organized by Marina Militare, Difesa Servizi S.p.A. and SSI Events. The leg ended in Bari yesterday afternoon after 270 miles of navigation, which took place between Brindisi, Pelagrosa, Torrecanne and Bari.

With a time of 1d 21h 7m 0s, the Benetau Figaro 3 of Team Spain – Pulsee led by 4m 20s Team Belgium – Red Dolphins Volvo Adeps (Faguet-Gerckens) and the Americans of Team USA – U.S.M.M.A Sailing Foundation (Wolfe-Wolfe) by 11m, coached by Los Angeles 84 Olympic champion Jonathan McKee. Fourth, 19m 10s behind the winner, was Team ENIT led by Pietro D’Alì and Claudia Rossi, who remained in command of the fleet for a long time betrayed by a bubble of no wind encountered during the last night of racing.

Meanwhile, in front of the seafront, the opening races of the Bari event of the Diam 24 class were underway, concluded with Team France – YCSL (yesterday 2-1-4) in the lead of the provisional ranking. The transalpine team is ahead of Team Oman by just one point (1-4-3) and two on Luna Rosa – Intesa San Paolo (5-3-1), which won the last race of the day. To support the action of the seven crews racing, a large audience crowded on Largo Luigi Giannella to listen to the live commentary of the regattas.

Admiration also for the kite foil riders, led by the leader of the Italian ranking list Lorenzo Boschetti, capable of spectacular evolutions in front of Molo San Nicola, where the regatta village set up by the Marina Militare Nastro Rosa Tour is operating which, in the Apulian capital, has found the support of the Circolo Vela Bari and the Circolo Barion.

The day ended with the award ceremony of the combined race of the Diam 24 of the Brindisi stage with those of the long one that moved the fleet from Brindisi to Bari: the winner, overtaking Team France – YCSL and Team Omani, was the crew of Team 3V – U-Earth led by Alessandro Franzì.

In Bari the sailing emotions of the Navy Nastro Rosa Tour, carried out under the aegis of World Sailing and the Italian Sailing Federation, will resume today afternoon with the regattas of the kite foil and the Diam 24. The second leg of the Hempel Double Mixed Offshore World Championship, destined to transfer the fleet to Ravenna, will start tomorrow morning.