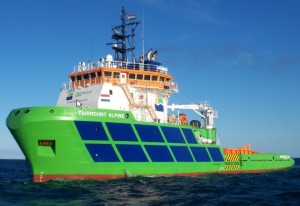 The MV Ikan Sepat is a 180 meter long, 28,503 DWT bulk carrier flying the Singapore flag. The vessel was grounded in the approach of the port of Puerto Cortés, located at the Gulf of Honduras in the northwest of the country.

In the early evening of December 13th Fairmount Alpine successfully refloated MV Ikan Sepat due to combined efforts of the tug’s crew, the salvage team and the crew of the vessel. Fairmount Marine is a marine contractor for ocean towage and heavy lift transportation, headquartered in Rotterdam, the Netherlands.