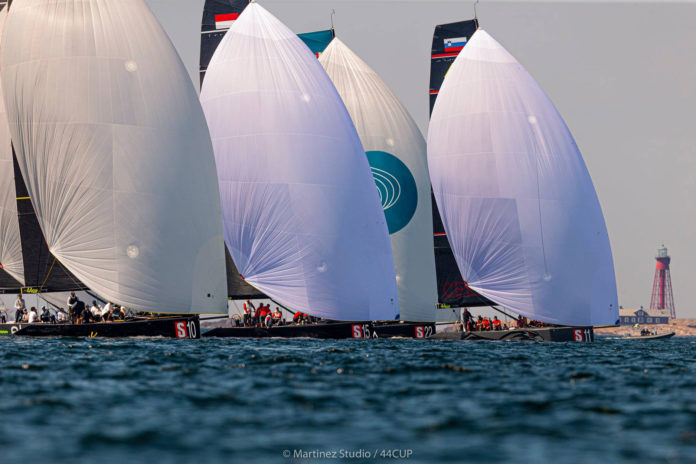 The RC44 fleet returns to Sweden’s west coast next week for the 44Cup Marstrand over the 29 June – 3 July, the 10th year the fleet has raced off the picture-postcard island.

The crew with the best success record over the ten years is unquestionably Chris Bake’s Team Aqua, who goes into racing next week as the defending champions with an impressive five 44Cup Marstrand titles to their name after back-to-back wins between 2011 – 2013 and 2019 – 2021.

In 2021 Bake’s crew saw off Nico Poons’ Charisma in an ultra-close conclusion to the regatta’s final race, in which five of the eight-strong fleet were still capable of winning the event.

“I like Marstrand a lot: the breeze is great, the weather conditions are highly variable – it throws everything at you. There’s the terrain and the horizon melds into the sea, but I really enjoy sailing here. There is a good atmosphere,” explained Bake.

Currently leading the 2022 overall ranking, with the winner’s golden wheels glinting onboard their RC44, is Igor Lah’s Ceeref powered by Hrastnik 1860. However, for the Slovenian team, Marstrand is not one of their strongest events, as their historical results show they have never finished higher than fourth on the podium.

The opposite is true for Swedish team Artemis Racing who has regularly enjoyed posting the best results of the year on its home waters, having finished third in Marstrand in 2021, 2019 and second in 2018.

Thanks to the new partnership, a group of youth sailors from the Marstrands Segelsällskap will join each of the 44Cup teams during the event to learn how a professional crew runs. The youth sailors will be expected to help with everything from the boat preparation ashore pre-event to following the racing alongside the coach and joining team de-briefings, offering them valuable insight and experience.

As usual the 44Cup Marstrand will begin with practice racing on Wednesday, 29th June followed by four days of racing over 30th June-3rd July.