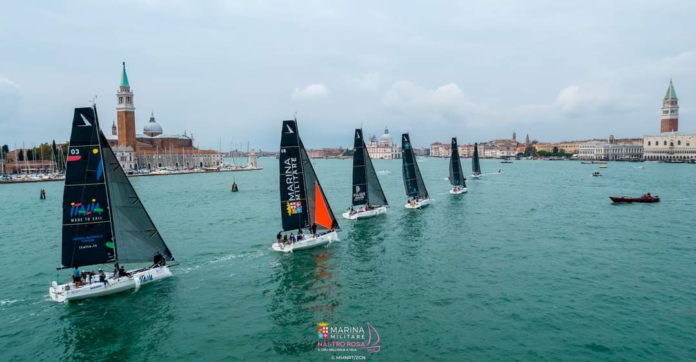 After a month of competition, the Marina Militare Nastro Rosa Tour has come to an end. The event, organized by Difesa Servizi SpA, Marina Militare and SSI Events under the aegis of the Italian Sailing Federation and supported in Venice by the Compagnia della Vela, closed with the award ceremony, held in the fascinating context of the Military Arsenal of Venice, in the presence of important institutional officials.

The Italian sailing rockstar Pietro D’Alì and the three-time J/70 European Champion, Claudia Rossi. The Italian duo, engaged on board of Team ENIT and winner of the Leg Marina di Ravenna-Venezia, anticipated the crew of the Marina Militare (Andrea Pendibene and Giovanna Valsecchi), winner of the Leg that ended in Marina di Ravenna, and Team Belgium-Red Dolphins Volvo (Sophie Faguet and Jonas Gerckens), confirmed at the highest levels during the course of the whole event.

As for the absolute successes in the three main categories of the event, to celebrate among the Beneteau Figaro 3 after a total of six stages, it was the combination of Team Belgium-Red Dolphins Volvo who anticipated the Marina Militare and Team Spain-Pulsee of Volvo Ocean Race legend Guillermo Altadill and Alina Bouzà.

Among the Diam 24, protagonists of regattas on the buoys in all the stopover of the event (Genoa, Civitavecchia, Gaeta, Naples, Brindisi, Bari, Marina di Ravenna and Venice), the men of Team France-YCSL, that have won half of the stages disputed, were on the top of the ranking. Finishing placed by only four points, the Omani of Oman Sail while the third step of the podium went to the girls of Luna Rosa-Intesa San Paolo, led along the circumnavigation of the peninsula by the former World Champion Maelle Frascari.
Glory also for the riders in the kite foil category, whose evolutions were among the most appreciated by the public who crowded the race village throughout the course of the event. Lorenzo Boschetti, dominator of the overall standings, and Irene Tari, who was the best among women, prevailed.

During the award ceremony, the Amerigo Vespucci Trophy-Capo di Stato Maggiore della Marina was awarded, attributed to the best crew representing the Armed Forces: the winner was the Diam 24 of the Navy, led by Uberto Crivelli Visconti, Francesco Linares and Giulio Calabrò .