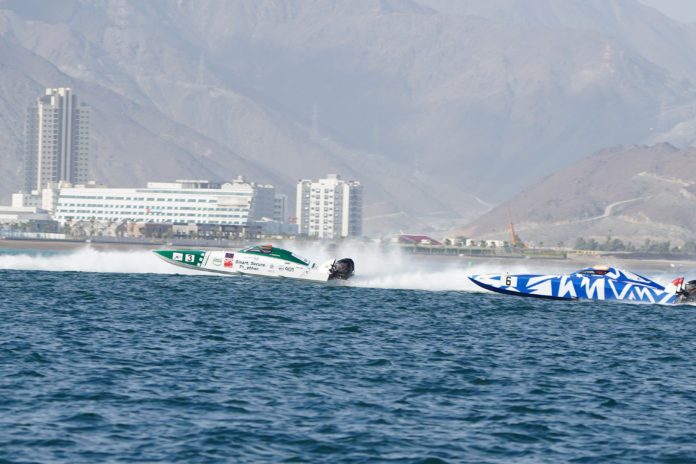 The sun was shining yesterday December 5th at the International Marine Club, where a beautiful day welcomed the third and last race of the Fujairah Grand Prix.

Following their success in the Fujairah Trophy Speed CAT Run on Friday, the Dubai Police confirmed their competitiveness winning Race 3 of the GP event. With this success, the boat number 3 collected three podiums in three races, what a Grand Prix for them!

The expectations were high for “the Six” since they recorded their third Pole Position during the session this morning, however they arrived at the race’s finish line in second position, bringing joy and honor to boat n.6. After challenging the top runners at every race, the Abu Dhabi Team with boat n.5 obtained the third position on the podium in this closing event in Fujairah.

Unfortunately, the competition didn’t go well for a couple of teams: due to technical issues, the Swecat Racing (boat n.2) couldn’t get their boat in the water for the start of the race; while the 222 Offshore (boat n.10) had to leave the race at lap 10 due to engine problems.

Following the sporting battle in the water, the prize giving ceremony was highlighted by the presence on the stage of His Highness Mohammed Bin Hamad al Sharqui, the crown prince of the Emirate Fujairah and Sheikh Saif Bin Hamad al Sharqui, Chairman of FIMC, who made this event even more extraordinary.

In conclusion, the first round of the 2021 XCAT World Championship wrapped up with satisfaction: the fascinating atmosphere of the Fujairah Grand Prix brought excitement and entertainment to the attending audience and fans.

Now the XCAT Circus is ready to move to the next and final round in Dubai, where we will find out who will be the new XCAT World Champion of this season!