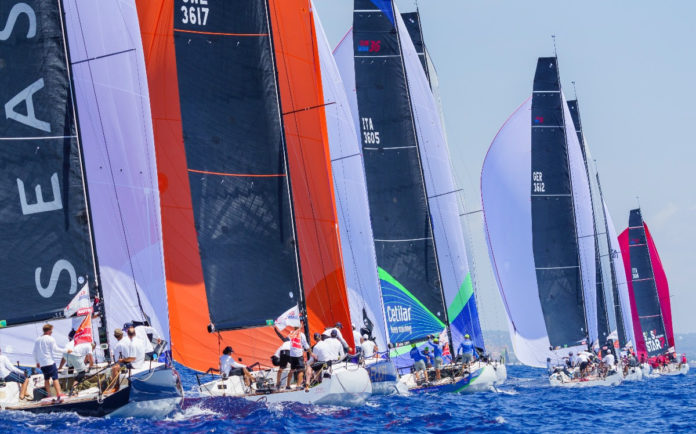 -42 Swan one-designs race across four classes in Palma
-Biggest Swan fleet of the season so far
-Leader board shaken up with Earlybird winning in CS50, Natalia in CS42 and G-Spot in CS36
-Swan 45s From Now On and Rats on Fire take second and third in the very competitive ORC1 class
-CS42 Teatro Soho wins ORC2

Palma’s famous sea breeze showed up for the 39th MAPFRE Copa del Rey, as did a mix of shifty, light winds which kept the fleets on their toes. It all came down to the last race, however, where 15-17 knots of wind made for a spectacular finale. Together with the Copa’s unique midweek score reset, where boats are assigned points based on their position in their class before the final races, the rankings among the Swan classes have been shaken up.

The Copa del Rey represented the third event of the Nautor’s Swan Nations League circuit. And it saw some new winners emerge across most classes. In the ClubSwan 50, Hatari led in the qualifiers before being edged into second by fellow German boat Earlybird in the finals. The top spot was in question until the last downwind leg of the last race. Polina Lyubomirova held her nerve to drive Bronenosec 50 into third place – an impressive achievement in only her fourth event.

Among the 11-strong fleet of ClubSwan 42s, there was remarkable consistency around the top three boats, despite very close scoring between the six fastest teams. Romanian George Brailoiu’s Natalia, helmed by Natalia Brailoiu, took first place in the end in a repeat of his performance of 2019, followed by Pedro Vaquer’s Nadir and Jose Maria Meseguer Pez de Abril.

Competition was particularly intense in the ClubSwan 36 class, which had seen a duel between Giangiacomo Serena di Lapigio’s G-Spot and Andrea Lacorte’s Vitamina earlier in the season. In Palma’s shifty conditions, G-Spot defended her top spot with bullet after bullet, while Vitamina fell off the pace in the finals. G-Spot’s lead was so commanding that she won the prize for the best performing one design in the event. Lorenzo Mondo’s Farstar and Edoardo Ferragamo’s Thirtysix scrapped for second and third place.

Five Swan 45s raced as part of the ORC1 fleet alongside a range of other fast boats. After the qualifiers, Fernando Chain’s From Now On stood in first place, a position which he defended well to come in second overall in the open classes. Rafael’s Carbonell’s Swan 45 Rats on Fire took third place in the class. And in ORC2, the CS42 Teatro Soho put in a well-earned victory.

Despite the intense rivalry and the biggest Swan fleet seen on the circuit so far this year, there were very few mishaps on the water. That combined with the beautiful backdrop of Palma’s old town and a series of carefully distanced social events organised by the Real Club Náutico make for a really special atmosphere.

Leonardo Ferragamo, Chairman of the Nautor Group, said: “I’ve always dreamt of attending the Copa del Rey and looked with admiration to this iconic race. Thanks to a strong collaboration with Real Club Náutico de Palma I’m proud to see that it has became a point of reference in Nautor’s Swan and one of the biggest events in the Swan One Design circuit. Having over 40 Swans competing is like a dream come true.

“This is the last leg of the circuit before the 3rd edition of The Nations Trophy, our event revamping the competition between Nations, which will be hosted here thanks to the long-term cooperation with the Real Club Náutico de Palma and the professionalism of its team.”

Meanwhile, Real Club Náutico de Palma President Emerico Fuster said: “It is a pleasure and an honour to have such a large Swan fleet at the Copa del Rey MAPFRE and at the Real Club Náutico de Palma. Fifty per cent of the boats attending the event in different categories is a great success, paving the way for another big event of the brand which we have the pleasure to host in September: the third edition of The Nations Trophy.”

After the final races, the scores for each competing nation were calculated and added to the tally for the season as part of the Nautor’s Swan Nations League. Results from the Copa del Rey saw Germany come first, followed by Italy and then Spain. After three events, it brings the Nations League standings for the season so far to Germany in first place, followed very closely by Italy and then Germany.