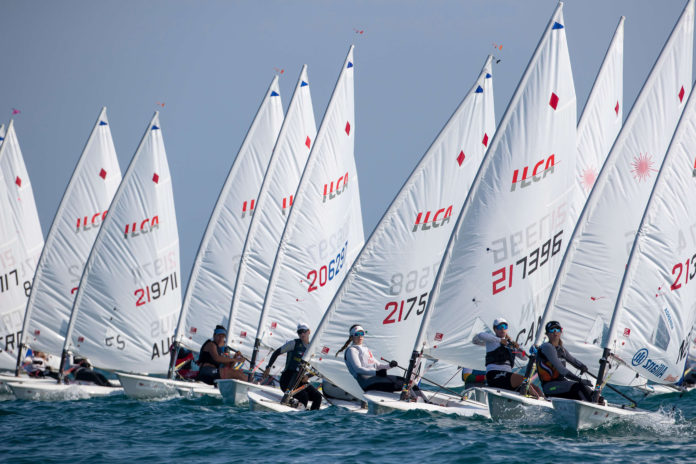 A dramatic penultimate day in the 2021 ILCA 6 World Championships ensured the quest for medals will go down to the final day in both men’s and women’s races. After a week of low wind, today was completely different and saw many sailors show their true form.

In the men’s races, leader Almoutasim Al Farsi was unable to compete in the first race and earned himself a penalty but followed up with a creditable third place and a fourth in the last race of the day. Umut Eyriparmak of Turkey won all three races today to take second while Nik Pletikos finished second in all three races and sits in third. Al Farsi remains out in front but his lead is now a single point over both second and third. Omani sailor Abdul Malik Al Hinai in fourth is still in contention after three strong performances today. He trails third place by six points.

The picture in the women’s category is becoming much clearer now after Anne-Marie Rindom (DEN) became the new leader with two second placed finishes. Just one point behind is Agata Barwinska of Poland but both are clear of the rest of the fleet. Vasileia Karachaliou of Greece is in third, 23 points behind second but there is drama unfolding behind her. Viktorija Andrulyte of Lithuania ended the day in fourth place and Emma Plasschaert of Belgium is fifth. Just four points separate third, fourth and fifth. Cristina Pujol Bajo (ESP) is sixth, eight points back. Julia Büsselberg, the overnight leader, fell to tenth place after today’s races.

Ahmed Al Wahaibi, Oman team coach, said, “We are very optimistic about tomorrow’s race. My team has been preparing very well for this championship and we are looking forward to the final day”.

Cristina Pujol Bajo of Spain, said, “Today was difficult for me because I already had one discard, so I didn’t want to race and go over the line or get a second yellow flag. Conditions are my preferred for sailing. I didn’t have any really good results today but also only had one bad result, so overall I am pleased.”

Egon Vigna, coach of the Italian Olympic Team, said, “Here in Oman we have three sailors, Chiara Benini, Matilda Talluri and Federica Cattarozzi. The races are very interesting for me to race here because we have a very young group but they have been racing well and I am very happy.”

Racing continues tomorrow with more races scheduled in each category. The event is supported by national carrier Oman Air, OQ and the Barceló Mussanah Resort as official partners, and Be’ah as environmental supporter. The National Mineral Water Company Salsabeel Water provided all essential water supplies for the event while the Royal Navy of Oman provided medical support throughout.

More information about the championships is available at organisers page www.omansail.com or the class website http://2021-radial.laser-worlds.com.