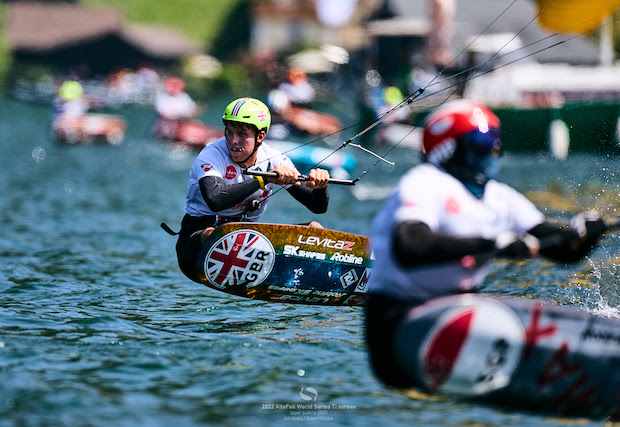 With only one race completed after three days of competition, the pressure was on to squeeze in as much racing as possible on the final day. With higher than average air temperatures of almost 30 degrees Celsius in Upper Austria, the thermal breeze on the 12km-long freshwater lake struggled to kick into gear.

However soon after lunch, enough breeze arrived to complete three qualifying races for the women and the two groups for the men. In the women, Damasiewicz followed up her Saturday victory in fluky winds with another light-airs masterclass, winning the opening heat of the session. In the next it was Daniela Moroz (USA) who came to the fore, with Damasiewicz still doing well in fourth place and retaining her overall lead.

Damasiewicz saved her best for last, executing a perfect port-tack start across the front of the fleet to seize the lead and stretch out to a dominant distance. The 17-year-old was head and shoulders above the rest of the fleet and won qualifying.

Meanwhile the two sides of the men’s qualifying were playing out with their own drama. In Blue Group there were a few tangles and pile-ups, particularly at one leeward mark rounding where Max Maeder (SGP) and Theo de Ramecourt (FRA) briefly tangled kites and brought the riders behind them to a standstill. Maeder somehow extracted himself from the spaghetti junction to recover to second in that race. Across the four races, the 15-year-old from Singapore scored 2,1,1,2 to win his side of Qualifying.

In Yellow Group it was Maeder’s training partner, 22-year-old Dolenc who dominated proceedings, winning three of the four races. In the other race he was going full pelt in a final sprint to the finish against Denis Taradin (CYP). In his bid for the bullet Dolenc wiped out at 30 knots, leaving the Cypriot rider to take the win while the Croatian limped across the line to take a still very impressive fourth place.

With so much action on the race course it was inevitable that protests would have to be heard on shore at Ebensee. All the while the best of the breeze trickled away from Traunsee and time ran out to see the Medal Series played out. The results of qualifying would have to stand.

While some might have argued the conditions were at times too marginal for kitefoiling competition, the consistent performance of the two winners suggested there was still method to the apparent chaos on the Traunsee race course. Both Dolenc and Damasiewicz scored three race victories from four, and both riders were discarding a worst score of 4th.

For Damasiewicz her maiden Kitefoil World Series victory was sweet. “I was second in Cagliari but that was a few years ago. This feels really cool. I’m really excited that I’m back after such a long time. I feel super motivated to to do it again and and hopefully it will happen again soon.”

The Polish rider attributed her victory to keeping a calm head throughout a challenging few days, and her higher fitness levels. “I worked really hard on my fitness through the winter and I think it really paid off in these conditions, pumping the board so hard through the light patches.”

Maeder paid tribute to his training partner Dolenc for the quality of his starts and for his positive attitude during the competition. For the Croatian, he was still coming to terms with his maiden World Series victory. “This is my first time on the podium,” he smiled. “So many times I’ve been in fourth place, and to win here feels like everything clicked into place. Honestly at this point I still don’t realise that I won. But yeah, I guess I’ll let it sink in a little bit. I had a great week this week. I think I sailed amazingly.”

If there was one regret, it was that he didn’t get to go up against Maeder in the four-board final. “Too bad that me and Max didn’t get to fight it out in the finals. We know each other’s strengths and weaknesses so well, it would have been a hard fight. To have won that way would have been an even sweeter victory but I’m still super happy with this win.”

After a long time away from international competition, Denis Taradin (CYP) was happy to come third in the men’s fleet behind Dolenc and Maeder. “There is nothing like racing in a tight fleet, putting yourself under pressure and seeing how you go when everything is on the line,” said Taradin. “I’m really happy with a 2,1,2 from today and it shows I’m on track.” Just off the podium but displaying flashes of world-class brilliance were Markus Edegran (USA) in fourth and Guy Bridge (GBR) in fifth place.

In the women’s fleet, the closest challenger to Damasiewicz was Ellie Aldridge (GBR) who scored three 2nds in today’s demanding and seemingly fluky conditions. A point further back in third overall was the reigning Formula Kite World Champion Daniela Moroz (USA), with a bit of a gap back to two riders in fourth and fifth respectively, Leonie Meyer (GER) and Alina Kornelli (AUT).

Next stop on the KiteFoil World Series is Gizzeria in the south of Italy. This is a favourite kiting venue and a regular on the world circuit, with the riders looking forward to competing on Mediterranean waters from 21 to 24 July.

All change on the 44Cup Marstrand leaderboard