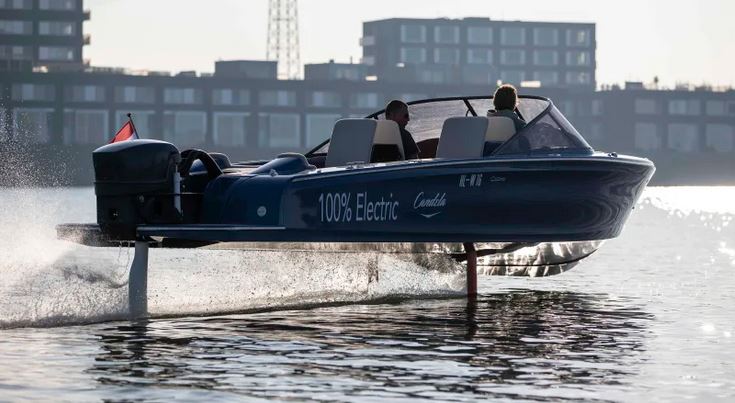 The new, flying, electric Candela C-7 is the first boat that doesn’t create harmful wakes. In this mini-documentary shot on the canals of Venice, we explain why hydrofoiling is the future for waterborne transportation – and how it can save Venice from Moto Ondoso – wake damage – that threatens to sink the city.

Just as smog became the number one nightmare for cities like London and Beijing as cars became commonplace, “moto ondoso,” – the waves caused by speedboats – has become a genuine threat to the residents and buildings of Venice.

The waves from myriads of taxi boats, water ambulances and police boats needed for all transports in Venice erode the wooden pillars on which the city’s iconic houses stand, and threaten to sink the fragile city into the lagoon.

During the Salone Nautico boat show, the Swedish tech company Candela showed their electric hydrofoiling Candela C-7, the first speedboat that doesn’t create wakes. Flying above the water’s surface at high speeds, the C-7 is designed with the intent for long-range electric cruising.

This mini-documentary details the problem of Moto Ondoso and how Candela’s hydrofoil technology can help electrify Venice’s transports.

The Swedish tech company has developed the unique electric hydrofoil technology by combining computers, sensors, and software with underwater wings, called hydrofoils. The result is a low-friction electric boat that has unprecedented range and speed, but also never-before-seen “superpowers” such as a very smooth ride, silent drive train and 95% lower operating costs compared to combustion engine boats.

Candela is currently working on the P-12 water taxi and the P-30 electric ferry, the latter has been purchased by Swedish authorities for public transport use in Candela’s hometown, Stockholm. These two craft could potentially fill most of Venice’s needs for transports.

Want to know more about how Candela will change urban waterborne transportation for the better?

Let us explain, or better yet, let us take you for a test drive in Candela C-7!