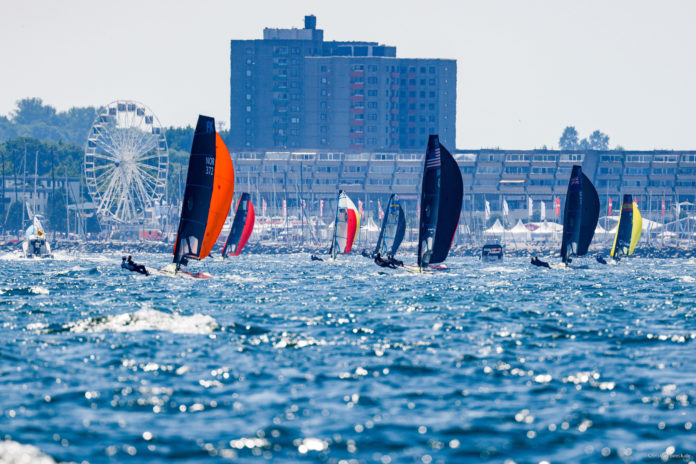 A show of strength by Olympic champions Ruggero Tita and Caterina Banti dominated the Nacra 17 competition at Kiel Week on Friday, June 24th. The mixed duo from Italy followed a single slip-up (13th) with three victories on the day. John Gimson and Anna Burnet from Great Britain are seven points back in second. Tokyo 2021 bronze medallists Paul Kohlhoff and Alica Stuhlemmer were still struggling a bit with the new rudder foil set-up and manoeuvres in steep waves in increasingly hard conditions. The Germans are just about on course for a medal race on Sunday in tenth place.

A spontaneous mixed crew from Hamburg is leading the 49erFX competition, an only female Olympic at Kiel Week. With her coach, two-time Olympic bronze medallist Thomas Plößel, Sophia Steinlein steered to two bullets, relegating Sweden’s Vilma Bobeck and Rebecca Netzler two points back to second. “Our goal at first was just the top ten” said Plößel, “but maybe more is possible.” After Olympic silver in 2021, Tina Lutz and Susann Beucke from Germany are in sixth place on their last regatta together.

With a jump to the overall lead, Olympic sixth Luise Wanser from Hamburg replaced Switzerland’s Yves Mermos and Maja Siegenthaler with Philipp Autenrieth in the 470. But things didn’t go according to plan outside. “We made two stupid mistakes, first a tactical one and then a unnecessary port-starboard situation with penalty turns.” the 25-year-old Wanser was unhappy. Besides winning the fifth race, the duo had to take a 16th into the scoring. Nevertheless, it was enough for the new top position ahead of the couple Malte and Anastasiya Winkel from Kiel, who are second three points back.

Subtropical conditions with wind force five to six challenged the athletes on all nine regatta courses off Kiel-Schilksee. Local Nik Aaron Willim lost his top position in the ILCA-7 class and slipped to fourth. Kaarle Tapper from Finland replaced him equal on points with his compatriot Valtteri Uusitalo. The Australian Mara Stransky leads the ILCA 6 class ahead of the two Dutch Mirthe Akkerman and Maxime Jonker. Julia Büsselberg from Berlin is fourth.

Irish Robert Dickson and Sean Waddilove lead the 49er class ahead of Frederik Rask and Jakob Precht Jensen from Denmark with Croatian brothers Sime and Mihovil Fantela in third. The class finished two races only in the afternoon, when the iQ-Foilers postponed their racing for a while. German Sebastian Koerdel defended his overall lead until then with two more bullets, nine in a row now. Lena Erdil from Germany was also still leading despite an UFD.