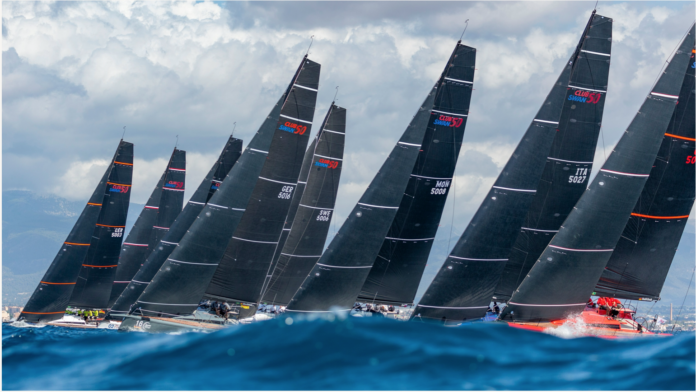 Thick, low cloud at daybreak soon burnt off to reveal blue skies in Palma, while a solid westerly wind meant that racing in the Nautor’s Swan Nations Trophy began on time at midday. After the postponement of the previous day, crews were eager to cross the start line, but remarkably, there were few recalls.

A heavy swell from the day before swung into the Bay of Palma to give the boats a real workout to windward in race one. The smaller CS36s, in particular, shipped plenty of water as they pitched over the crests, and their owners fought to keep them on course.

Dr Christian Kilger, who recently joined the ClubSwan racing scene in his CS50 Tango, admitted that the day had provided a steep learning curve. “We’re just beginning, learning about the boat,” he says. “The crew got us in the right place for the start, but in race one, the owner-driver made a mistake so I had to come down behind Cuordileone – that cost us three positions.

“In the second race, I can say that I am getting better, learning to drive the boat. The Argentinean professionals trimmed the boat properly and got it up to speed, so we finished in second place. If you’re just starting out, it’s super cool,” he explains with a grin. “It’s kind of like Formula One.”

Romanian owner Natalia Brailoiu on the CS42 Natalia was equally proud of her team’s performance, scoring a bullet and a third place to top the class leaderboard. “This feeling is wonderful, but it’s only the first day of racing,” she says cautiously. “I have an amazing crew. There are moments when it was hard and the wind was shifting a lot.”

There was a big right shift on the first leg of the first race which left some boats high and dry. Superstar sailor Tom Slingsby on German CS50 Earlybird describes it. “That right shift put us at the back of the fleet, but we fought back until we were in 7th place. We were really happy with that.”

Race officials decided to shorten the course for the second beat, and their decision was vindicated as the wind began to veer to the north. “We were taking bets on how far north it would go,” says Dr Kilger. After the first race, it veered through north, then backed a little so that it was blowing through the Tramuntana mountains behind the city – what the locals call the Mistral.

The course marks were quickly relaid by the four-strong team and the second race got under way in slightly lighter winds with the falling seas on the beam. Again, there were clean starts across all the classes, and the fleets split with some going left and others right as they beat in towards the majestic skyline of Palma, dominated by the Gothic Santa Maria Cathedral.

There was little advantage to be had from either side, and the two streams of boats remerged at the windward mark, easing sheets onto the top reach, then readying spinnakers for the hoist as they rounded the second windward mark. By the final downwind leg, the wind and the seas had dropped noticeably – down to around 7 knots true.

In the CS36s, Andrea Lacorte’s Vitamina maintained a big lead to cross the line first, followed by Farstar, while Giangiacomo Serena di Lapigio’s G-Spot clung on for third place. G-Spot took the lead overall, but it rekindles the close competition seen at the earlier ClubSwan regattas.

“It was shifty and difficult – you need a lot of luck in these conditions,” says Serena di Lapigio. “In the second race, we started very badly, so we’re very pleased with our third place. We are starting to know the boat but there’s still a lot to understand because the 36 is a very modern and curious boat. Upwind in particular, we need to work.”

In the CS42s, Massimo de Campo’s Selene – Alifax yacht won race two, followed by Dralion and Natalia. And in the CS50s, Earlybird lived up to its name and crossed first, followed by Tango and Stella Maris.

“A wide range of boats made podium positions today, so it is clear to me that the competition here in Palma is wide open,” said Federico Michetti, head of Swan sports activities at ClubSwan Racing. “There are two more days of racing, and I think we should expect some surprises before we can calculate who are the winning nations in the Nations Trophy.”

Gottifredi Maffioli was sponsor of today’s prizegiving with a generous voucher for its famous running rigging.