Palma serves up a day of perfect light-wind sailing 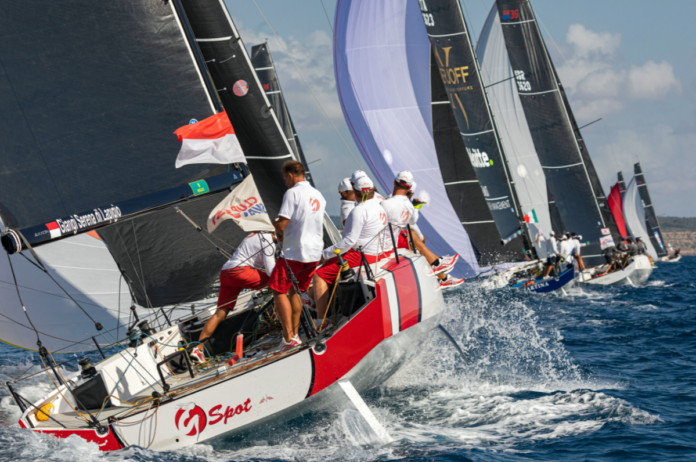 Patience was rewarded out on the water today for the 28 boats competing for the Nautor’s Swan Nations Trophy in Palma. Those with the stamina to close out the day’s three races saw their positions rocket up the leaderboard, while even the smallest lapses in concentration were punished in the light winds.

Conditions were a marked improvement on previous days, with clear blue skies from the off and a steady gradient wind from the southwest. Blowing into the Bay of Palma over the low-lying Cap de Cala Figuera, the wind was reinforced by a mild thermal effect over the island. It all amounted to some 8-12 knots of wind – plenty to get the boats into double-figure speeds.

“It’s been a very long day, but nice races with nice wind and flat water, so it was fun,” says Andrea Lacorte, owner of Vitamina, the day’s top-scorer in the CS36 class. “It’s much more fun sailing when it’s flatter because the boats are faster, lines are quicker and you can have faster manoeuvres. The capability of the helmsman comes closer so there is more fight.”

He is now tied for points with G-Spot in the dynamic CS36 class, while Lorenzo Mondo’s Farstar is within touching distance in third. “The first two races were good – the third one we were a little bit tired and lost something in the first upwind then we couldn’t recover,” says Mondo. “We choose the left when we should have chosen the right, but it happens. I had fun also on the ride.”

Among the six-strong fleet of ClubSwan 42s, things are closer still with all boats lying within five points of each other. Massimo de Campo’s Selene-Alifax lies a whisker ahead at the top of the table with a good performance that included a first and a second-place finish.

British CS42 Long Echo, skippered by Alastair Hall, put in a season-best performance with a bullet, third and fourth position. “It was a fantastic day out on the water today – Palma at its absolute best and perfect sailing conditions,” Hall says. “It all came together in the second race. We had a good start, picked some good shifts and managed to work our way up to our front. As a crew we’ve just started to come together. There’s no shouting on our boat – we really work to try and help each other.”

Louis Balcaen’s Balthasar was the big winner in the ClubSwan 50s, building on a bullet yesterday with another one in today’s final race. It was enough to push him ahead of leader Earlybird. “It was a really good consistent day,” Balcaen says. “We had two bad starts but we managed to sail a bit through the fleet. Tactician Bouwe [Bekking] picked the shifts really nicely and we got some good boat speed. Good sets, good hoists and good team-work.”

Leonardo Ferragamo’s CS50 Cuordileone also made big gains today with solid results that included a bullet and a fifth place. In one of racing’s serendipitous moments, it was a performance exactly matched by his son Edoardo in his CS36 Thirtysix. “We love sailing – there are so many great sailors around, so to both win one of the races – it is very rewarding and fun,” says Ferragamo senior.

“We came first in the second race which is extremely satisfying. I would say we are more cheering for each other than competitive,” adds his son with a smile. “All year long we talk tactics – when do you tack and when do you gybe!”

At the end of the day’s racing, it means that Germany and Italy are stretching out their leads as the top scoring nations. Germany has the edge for now, but Italy is ramping up the pressure across the fleets. Edoardo Ferragamo pointed to the importance of the friendly competition between nations. “It is a special year for Italy,” he says. “We have won a number of things this year – the Euros, the Wimbledon tennis finals, a lot of Olympic medals.”

His father agrees. “It would be a good year and would be a nice competition to end a fantastic sporting year for Italy.”

Tomorrow will be the final day of racing, with similar wind conditions forecast. It will be make or break for a number of boats, and the winning nation will also be decided – both in the Nations Trophy and Nations League. There is everything still to play for.